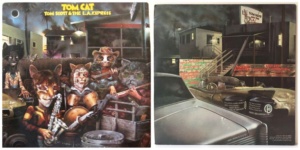 This week’s Vinyl Vault features a mid-70s West Coast fusion classic: “Tom Cat” by Tom Scott and the L.A. Express. Recorded in 1973, it was released on Ode Records in 1974. This was the second album by this group and clearly the one with the best album cover.

By 1974, Tom Scott was a veteran studio musician and he had also released several albums under his own name and as a front man for other groups. This was also the time period when the band was playing and recording with Joni Mitchell, having appeared on her albums “Court and Spark” and “Miles of Aisles” and later, on “The Hissing of Summer Lawns.”

The prior L.A. Express album had featured Joe Sample on keyboards and Larry Carlton on guitar, but by the time “Tom Cat” was recorded, they had left the L.A. Express to concentrate on their other band, The Crusaders. Their replacements for “Tom Cat” were bluesman Robben Ford on guitar and Larry Nash on keyboards, primarily the Fender Rhodes electric piano. Rounding out the band were Max Bennett on bass and John Guerin on drums. *Gossip Alert* During this time, Guerin was Joni Mitchell’s boyfriend.

The playing throughout “Tom Cat” is tight and virtuosic. Scott, who also produced the album and as leader of the band, is frequently out front with sax solos as well as turns on the lyricon and various synthesizers. Ford and Nash also get multiple opportunities at solo expression. Drummer John Guerin is always hard at work constantly adding fills and filigrees to keep a heightened intensity. Max Bennett on the bass is equally busy laying a funky foundation.

“Tom Cat” wasn’t a big seller upon its release, but over the years it has gained significant recognition as one of the better albums in its genre from that era.

Whether you’ll be walking down memory lane with this album or checking it out for the first time to get a little slice of history from nearly 50 years ago, check out “Tom Cat” on the Vinyl Vault on Tuesday, October 13, at 8:30 pm. Only on KUVO JAZZ.