Vinyl Vault—We’re All Together Again for the First Time 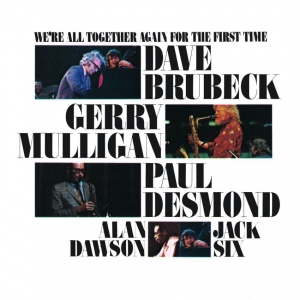 The Vinyl Vault, the fundraiser edition, features a 1972 live album from Dave Brubeck in a quintet setting, “We’re All Together Again for the First Time.” Released in 1973 on Atlantic, the album is drawn from three European concerts the year before. Besides Brubeck, the lineup includes Paul Desmond, alto; Gerry Mulligan, bari sax; Alan Dawson, drums and Jack Six, drums.

The Dave Brubeck Quartet with Paul Desmond had broken up around 1968. Shortly afterward, Gerry Mulligan stepped up to the sax chair bringing his baritone sax to replace Desmond’s alto. Around that same time, Dawson and Six replaced Morello and Wright in the rhythm section. Given that backdrop, it’s easy to see where the album title came from.

Besides their association with Brubeck, Desmond and Mulligan had played together on many occasions before this recording. So, by the time the quintet launched its 1972 world tour, the two saxophonists had significant experience together and with Brubeck. On these live sides, the interplay between these two is a highlight. Not only does their playing compliment each other, but the sinuous, melodic lines of Desmond’s alto are a tasty counterpoint to Mulligan’s guttural, low-end tone.

The program features an epic 16-minute version of “Take Five” along with other gems such as Mulligan’s “Unfinished Woman” and a spontaneous blues track entitled “Rotterdam Blues.”

Join Geoff Anderson for the Vinyl Vault this Tuesday, May 4, at 8:30 pm on KUVO JAZZ.