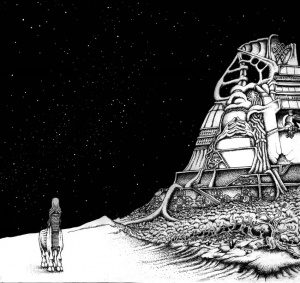 It’s guitar nirvana on the next Vinyl Vault when we feature a 1980 release from Steve Tibbitts entitled “Yr.” This was Tibbitts’ second album and was originally released on Tibbitts’ own label, Frammis Enterprises. The LP was later picked up by ECM and reissued in 1988. But the Vinyl Vault has the original release with the original artist-approved mix.

This album doesn’t contain just music, but rather it’s an entire ecosystem, a total immersive soundscape. Tibbitts creates a symphony of a dozen or more overdubbed guitars layered upon one another like geologic strata exposed by the erosion of the Grand Canyon. The soaring guitars are usually underlain by multi-textural, multi-cultural percussion. The whole expanse will build to a climax, then retreat to the intimate and solitary sound of a lone acoustic guitar. Tabla, kalimba, dobro, sitar, congas, glockenspiel all provide a fluid, ever-changing backdrop to Tibbitts’ shape-shifting 12-string and electric guitars. It’s all augmented by tape loops and samples and resamples and more tape effects for a truly unique experience.

Tibbitts composed all the music. Each song is a singular journey, never trodding the same ground twice. His compositions cover miles of musical ground; like driving through the tundra on a high mountain pass, down into ever thickening forests of spruce, then aspen, then lower-level Ponderosa Pines and finally onto the plains at a far different elevation.

Although primarily the brainchild of Tibbitts who wrote the songs, recorded the music, provided the studio effects and played most of the instruments, he was joined by Marc Anderson who has turned out to be Tibbitts’ primary collaborator over the years, Anderson played a dozen different percussion instruments ranging from congas, bells and maracas to Ago-go bell, clave, surdo and glockenspiel. Robert Hughes joined on bass and Steve Cochrane, Marcus Wise and Tim Weinhold added tablas and bongos.

Impossible to succinctly categorize, this music draws from jazz, rock, world music and New Age. Many listeners draw parallels with Oregon, Mike Oldfield, Jade Warrior and Pat Metheny. And it’s all executed with a virtuosity possessed by few others. If you’ve never heard Steve Tibbitts, you’ve never heard anything like it.

Check out Steve Tibbitts on the Vinyl Vault with host Geoff Anderson, Tuesday, April 27, at 8:30 pm on KUVO JAZZ.