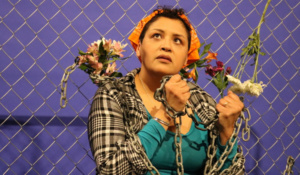 “War of the Flowers!” retells the Kitayama Carnation Strike led by five Chicana women on February 15, 1969. The five women chained themselves to the front gates of the Kitayama Carnation plant in protest of poor treatment and unhealthy working conditions. Weld County sheriffs set up their tear gas machines at point blank range, the women collapsed to the ground. The action ended the 8-month strike, as the women feared escalating violence. Their struggle has ignited a tremendous flow of attention to their bravery and determination on the anniversary year of their sacrifice.

Zooming with Stories on Stage—Sheltering in Place

Closing Weekend! Chicano Power 1969! The Birth of a Movement