This month Carolyn Joy (of Joy Wine and Spirits) and I are joined in studio by Sergio Negrin of Frijoles Colorado, a one of a kind Cuban restaurant in Lakewood.  Together they put together an amazing feast for the palette. Carolyn brings a Gerard Bertrand Cap Insula French red wine to pair with Sergio’s Ropa Vieja (shredded skirt steak) in a tomato wine sauce with saffron rice and sweet plantains. Interview with Carolyn Joy and Sergio Negrin 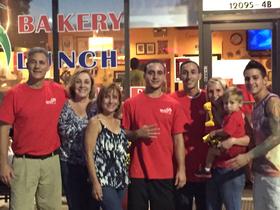 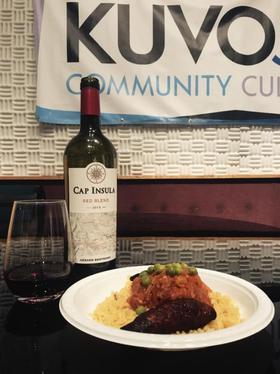 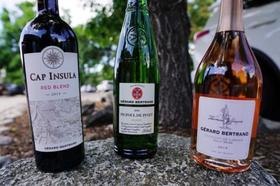 Organically grown, family-owned estates and small production are often qualities of a wine featured at Joy Wine and Spirits’ tastings and are a focus for the KUVO food and wine pairing.  There is only one glaring difference for this month’s feature – and that would be size.

And size in a big way.  How about one man, Gerard Bertrand’s, 20 million bottle productions from the Languedoc-Rousillon region, the world’s largest producing region?  Just the Languedoc-Rousillon region produced 1.2 billion liters of wine in 2016 in versus 1.9 billion produced in all of California. Now with all that wine, you might not expect much.  But, you would be missing out on a huge opportunity.  And I will get to the “why” are we featuring this wine in a moment.  But first, as with most wine, let’s focus on place.

The Languedoc is unique in that it is one of the oldest, if not the oldest, winemaking region, dating back to the Greeks in the early 5th century BC.  Over the centuries, due to it’s amazing growing conditions, this area became known for producing  industrial wine for the masses.  Because the focus was on production,  the wine often lacked in body  and was sometimes even enhanced with wine brought in from Spain or Italy, to add a little more structure and color,.

However, in the past 20 years, in a movement lead by Bertrand, much wine produced now is a true reflection of the Languedoc and it sub-appellations’ unique terroirs.  Probably because it is large, the region is diverse.  The climate varies between arid and sunny Mediterranean to cooler, wetter oceanic climate.  The soils run the gamut - chalk, shale, stone, sandstone, schist, silt, clay and limestone, and elevation of vineyards run from sea-level to 900 feet of elevation.  Reflective of all this diversity is the varieties of grapes grown, from international varieties like Chardonnay, Cabernet and Merlot to Rhone varietals (Syrah, Mouvèdre and Grenache), red, white and Rosé and still and Sparkling.

“I was struck by just how much great wine is being produced here (white and pink as well as red), and what wonderful bargains most are. And I was thrilled to see continued proof of the excitingly tense dry whites that can be grown on higher ground in Roussillon. These wines are so full of individuality, encompassing a range of terrains, grape varieties and winemaking methods, that I could not help comparing them with the narrower range of flavours available from, say, Bordeaux and Burgundy, whose wines are generally much more expensive (although some cult Languedoc wines, such as Grange des Pères and Peyre Rosé, are exceptions“.

Visionary, Gerard Bertrand, started his” career” around 10 years of age.  So, in the last 40 years he has acquired quite a bit of knowledge that has allowed him to transform family vineyards into high quality, mostly bio-dynamically farmed, still family owned estates.  (Estates with an “S”, as over time, he has acquired 14 of them…all will be certified biodynamic in the next couple of years).

Amazingly, Bertrand has been able to retain the unique qualities of each region within Langeudoc and reflect the terroir of each area in his wines.  Bertrand produces some off the chart wines, that rival wines 100 times the price from better known Burgundy or Bordeaux, but he also produces plentiful, everyday wine.

A real bargain sparkling made from Chardonnay, Chenin and Pinot Noir named after Thomas Jefferson who was a great admirer of Limoux, the only sparkling wine found in his cellar. Limoux is a cooler, higher elevation area of the Languedoc. Made in the traditional method, like Champagne, without the expense.  A delightful refresher and staple in your fridge this summer.

Often, Picpoul can be a sort of nondescript wine, but this version is an exception.  Dramatic temperature swings and limestone soils bring out the best in this wine.  It has more texture than others of its type, because it is aged on the lees for 6 months in stainless steel until it is bottled the following spring. If you like Muscadet, this is a must try.

While there is great diversity in wine from the Languedoc, it is really red wine country.  The goal of this wine is to bring consumer awareness to the region, by over-deliverring on the value. This bottle was quickly emptied during the KUVO Food and Wine Pairing this month when it was paired with a traditional Cuban dish of Shredded Skirt Steak in Tomato Wine Sauce from Frijoles Colorado Cuban Café.

“Coming from the la Clape region of the Languedoc (which is one of the most beautiful spots in the Languedoc) and offering lots of tobacco leaf, blackcurrants, chocolate and spice, the smokin’ good 2015 Languedoc Cap Insula is medium to full-bodied, nicely concentrated and textured, with a core of sweet fruit. Made from a blend of 47% Syrah, 30% Grenache and Carignan, aged in barrel, I’d happily drink bottles over the coming 4-5 years” 92 Points

With a little humor, what surprised me about this estate, is that size, isn’t everything.  Often, we at Joy Wine and Spirits downplay large production wines.  But hardly ever do we find one of this multitude, where the owner cares for the land and the wine, like they do their pocketbook.  So, come in and try something new, something where the farming adds to rather than takes from the land and of course, something delicious.