Hip-hop and peace are often oxymoronic terms, but not when it comes to Salvadoran artists in the U.S. as demonstrated by the 2012 documentary Words of Revolution.

Shaped by their experiences growing up in a war-torn country and challenges navigating American culture, this film tells the story of immigrant hip-hop artists and activists from El Salvador  who leverage their voices to bring cultural identity to a people beginning a new chapter in their history – a chapter of peace, prosperity and unity.

Following artist in San Francisco, Washington D.C. and New York, this film chronicles the struggles and triumphs of each vocalist.

“It’s a documentary about a culture trying to revive and progress from a history of violence,” Director Junior Gonzales told LA Weekly. “I just wanted to bring awareness and do something positive for my culture, so that they can feel proud of something.”

Santos, a hip-hop artist residing in San Francisco, mentions how Salvadorans are used to making due with what they have as a result of living under an unstable government. The film’s style reflects this ethic of making do with what you have – the cameras are below standard cinema quality and the scenes posses a raw roughness.

Watching Words of Revolution feels more like following some friends showing you around their community than sitting back and watching a film.

Though the footage is rough at times, the message of hope, positive leadership, peace and cultural pride runs strong throughout. And the power of music is undeniable.

If you attend one of XicanIndie Film Fest’s screenings, let us know which film you saw and your thoughts in the comments section below! 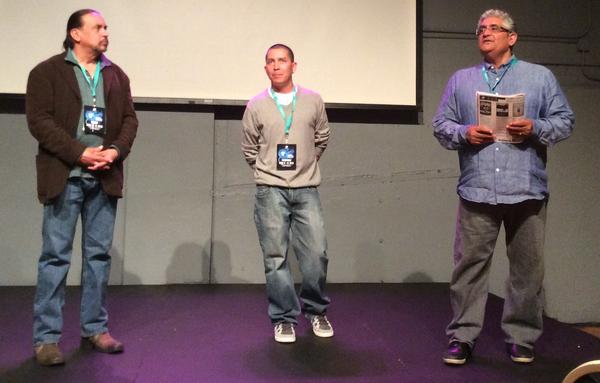