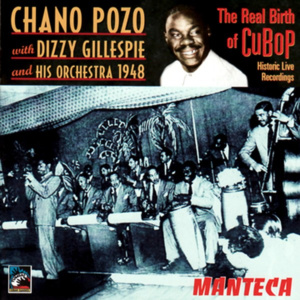 “Manteca” was first recorded by Dizzy Gillespie and his Orchestra on December 30, 1947. Written by Chano Pozo, Dizzy Gillespie and Gil Fuller in 1947, it is considered foundational to Afro-Cuban jazz and was the first tune based on the rhythmic pattern of the clave (“key”), a five-stroke pattern which originated in Sub-Saharan African traditional music. In Afro-Cuban music, the clave holds the rhythm together just as a keystone holds an arch in place. Note: Clave is also the singular form for hardwood sticks used in pairs in Afro-Cuban ensembles. 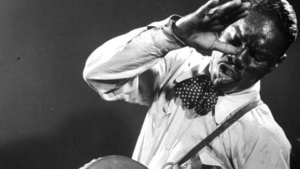 Chano Pozo (Jan 7, 1915 – Dec 3, 1948), Cuban jazz percussionist, singer, dancer, and composer, was a significant contributor to the origins of Latin jazz. Their neighborhood (El Africa Solar) was famously dangerous and Chano dropped out of school after third grade, then spent his time playing drums, fighting, drinking, and engaging in petty criminal activities. When 13 years old Chano was sent to the reformatory in Guanajay, where he learned to read and write, repair automobile bodies and improved his already remarkable skills, playing a variety of drums. He became a Santeria devotee, pledging allegiance to Saint Barbara, analog of Shango, the Yoruban god of fire and thunder, wearing their associated color red thereafter. After 1929 he started composing music, primarily for Carnival, winning numerous cash prizes. With fellow musicians he wrote “Le Comparsa de los Dandys”, unofficial theme song of Santiago de Cuba. He became a dancer, with the group “Dandys”, and a bouncer, but continually faced problems with the color barriers in Cuba. He moved to the US in 1947 where he was introduced to Dizzy Gillespie, who was looking for a congo player. On 12/2/1948 he was shot by a local bookie whom Pozo had accused of selling poor quality marijuana.

Dizzy Gillespie (Oct 21, 1917 – Jan 6, 1993) American jazz trumpeter, bandleader, composer, and singer combined musical ability, showmanship and wit to become a founder of bebop, along with Charlie Parker. He originated some of the best-known symbols of jazz in the 1950s (beret, horn-rimmed glasses, scat singing, pouched cheeks while playing, bent horn, sense of humor). As one of the founders of both bebop and CuBop, he was awarded the Polar Music Prize, the Royal Swedish Music Academy of Music Award, in 1993. In addition, he received the American National Medal of the Arts in 1989 and was inducted into the Big Band and Jazz Hall of Fame in 1982.

Gil Fuller (Apr 14, 1920 – May 26, 1994) worked as a writer and jazz arranger with a wide array of musicians in the 1930s and 1940s, including Les Hite, Jimmy Lunceford, and Billy Eckstine, Benny Carter, Benny Goodman, Woody Herman, Count Basie, Machito and Tito Puente. After World War II he increasingly focused on bebop and with Dizzy Gillespie composed “Manteca”, “Swedish Suite” and “One Bass Hit”. He composed “I Waited For You”, with Gillespie co-credited.In 1957 he founded a publishing company and expanded his repertoire into film music and pop (with Ray Charles, among others).