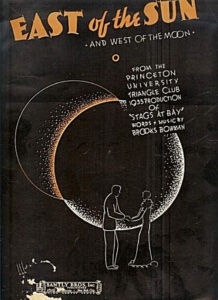 Tune in weekday mornings for Stories of Standards to hear our favorite versions of “East of the Sun.”

Rodney Franks presents Stories of Standards Monday through Friday at 7:50 and 8:50 am starting Monday, December 27.

“East of the Sun (and West of the Moon)” was written by Brooks Bowman for the 1934 Princeton University Triangle Club’s production of “Stags at Bay.” One of three songs for the play (the others were “Love and a Dime” and “Will Love Find a Way?”), It became a hallmark of the Princeton a capella groups the Tigertones and the Nassoons. The first recording was made May 28, 1935, by Tom Coakley and His Orchestra, who toured coast-to-coast tour, a recording which went to number one on the charts; the song has been a favorite of musicians and audiences ever since, ranging from Tommy Dorsey (1940) to Stan Getz (1955), Ella Fitzgerald (1959), Al Hirt (1964) and Diana Krall (1999). 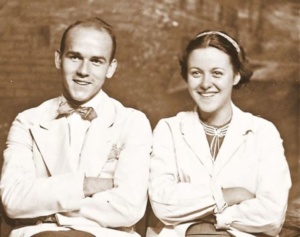 Brooks Bowman (Oct 21, 1913 – Oct 17, 1937) attended Stanford University but transferred to Princeton as a sophomore with a friend. He was an enthusiastic member of the Triangle Club, which produced sophisticated musical comedies, where his songs attracted the attention of Hal Kemp, who recorded at least two of them. In addition, Bowman was president of the Princeton Tower Club. Bowman went to Hollywood after graduation but was persuaded by fellow Princetonian William Borden to return East in 1937 to start a songwriting collaboration. Bowman died in a car accident before the first result of that partnership could be published. Before Bowman’s death, F. Scott Fitzgerald (Princeton 1917 graduate and Triangle Club alumnus) had written him a letter of congratulation suggesting that “East of the Sun” be used as “a song of devotion” to Princeton.