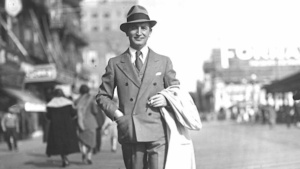 Harry Warren (melody) and Johnny Mercer (lyrics) wrote: “Jeepers Creepers” for the 1938 movie “Going Places”, with Louis Armstrong premiering. Helen Ward, lead singer for the Benny Goodman band at the time, was said to be the inspiration for the lyrics, while Mercer said that the phrase itself came from a Henry Fonda line in an earlier movie. Ethel Waters made the song’s first recording in 1938. Louis Armstrong’s 1939 recording was one of three popular versions that year, with Al Donohue and Larry Clinton recording the other two.  It was nominated for a 1938 Academy Award (Best Original Song), but lost out to “Thanks for the Memory”. A theater in Manhattan is named for him

Harry Warren was born Dec 24, 1893, died Sept 22, 1981, and became the first American composer to focus his writing on film, with his songs featured in over 300 films; he wrote the music for the first megahit musical, “42nd Street”, Busby Berkeley’s first major film musical, as well as “I Only Have Eyes For You”, “Lullaby of Broadway”, “We’re In the Money”, “On the Atchison, Topeka and the Santa Fe” and “Chattanooga Choo-Choo”. He was inducted into the Songwriters Hall of Fame in 1971 on his 80th birthday. A theater in Manhattan is named for him. William Zinsser said of him: “The familiarity of Harry Warren’s songs is matched by the anonymity of the man… he is the invisible man, his career a prime example of the oblivion that cloaked so many writers who cranked out good songs for bad movies.” 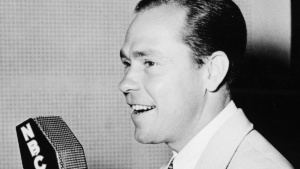 Johnny Mercer (Nov 18, 1909 – Jun 25, 1976), lyricist, songwriter, and singer, co-founded Capitol Records with Buddy DeSylva and Glenn E. Wallichs. He wrote lyrics to over 1500 songs and won four Best Original Song Oscars. Born in Savannah, Georgia, His family was wealthy until the family business went bankrupt when Mercer was 17 years old. Mercer’s father, a million dollars in debt, refused to declare bankruptcy and spent the rest of his life paying off the debts. Young Johnny went to New York, where he won a singing contest and got a job with the Paul Whiteman Band, where he met Hoagy Carmichael. They soon afterward had a hit with “Lazybones” (1933). His singing career took off and in the early 1940s, he had his own radio show, Johnny Mercer’s Music Shop. As first President and talent scout for Capitol Records in 1942, he led the company to a point where they produced one-sixth of all records sold in the United States by 1946. With Henry Mancini he wrote “Moon River” for the film “Breakfast at Tiffany’s” in 1961 and the following year, also with Mancini, wrote the title song for “Days of Wine and Roses”, thus becoming the first songwriter to win four Oscars. His widow Ginger (nee Elizabeth Meltzer) founded the Johnny Mercer Foundation in 1982.