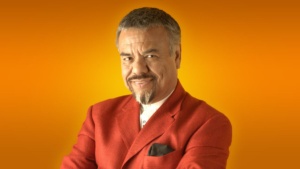 Little Joe was born in Temple, Texas into a large musical family and was born in the middle of 13 brothers and sisters.  He started performing with the Latinaires when he was 13 years old and soon their band became Little Joe y La Familia.

Little Joe’s musical style has been called Tejano, Tex-Mex, Chicano, La Onda, but at its heart, he describes his music as “multicultural music in two languages.”  He credits Beto Villa, the creator of “Orquesta Tejana” as the person that influenced him the most.  Trumpets and saxophones became part of his bands because of that influence.

He has earned numerous Grammy Awards including his album 16 de Septiembre for Best Mexican-American Performance in 1992.  In 2008 his Album Before the Next Teardrop Falls was awarded the Grammy for Best Tejano Album.

Little Joe Hernandez is a living legend in the Tejano music world and continues to tour and perform across the country.  He’s known as the “King of the Brown Sound” and credits numerous musical genres for his blend including Mexican, rhythm & blues, country, pop, classical, and Jazz.  He has said that because of his love for jazz music he has always dreamed of being a jazz musician.

Tune in to Debra Gallegos on Canción Mexicana as we will highlight many of Little Joe’s hits and share memories of his life. Happy Birthday, Little Joe!