On Eats & Beats this week, we heard from Mike Mason, the manager of the landmark Mexican eatery, Casa Bonita.  The occasion was their 40th anniversary on March 27, 2014, and celebrated by a two-hour cliff diving show on Saturday, March 29. 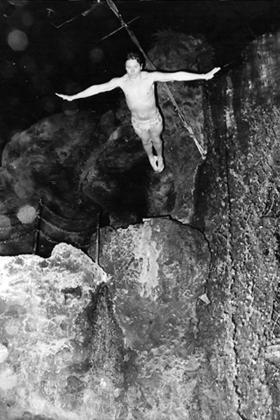 It’s even hard for Mason to explain the enduring appeal of a busy, three-story restaurant with, yes, cliff divers, gun fighters, gorillas chasing damsels, puppet shows and more.   He began at Casa Bonita 38 years ago as a busboy.

Mason told “First Take with Lando & Chavis” one of the most unique moments in their history was the send-up from the producers of the animated TV show “South Park.”  (language advisory!)   “It turns out that this is one of Matt Stone and Trey Parker’s favorite places in the world,” said Mason.  In the Season 7 episode, the restaurant is referred to as “Mexican Disneyland.”

Music on this feature by Latinismo Mexico, the title track from their CD La Cucaracha and the GRP All-Star Big Band, “Cookin’ at the Continential,” from the CD All Blues.