Celebrating the Spirit of Cesar Chavez & the Chicano Movement 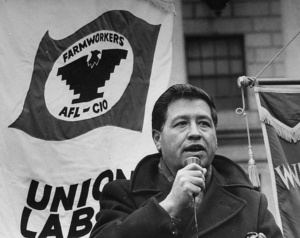 Canción Mexicana celebrates the spirit of Cesar Chavez and the Chicano movement.

Cesar Chavez inspired a movement of non-violent means to champion the basic rights and living conditions of the farm workers. Born in Yuma, Arizona, he dedicated his life to organize strikes against the injustices of the labor conditions—the most noted, The Delano grape strike of 1965-1970.

Canción Mexicana will further celebrate his life and legacy with songs of the labor movement and the famous march to the capital, Sacramento from Delano in 1966. We commemorate this movement with songs like, Peregrinacion, Brown-Eyed Children of the Sun, Nosotros Venceremos and other songs made popular by Daniel Valdez, Rolas De Atzlan and Su Teatro.

Join host Yolanda Ortega on Sunday, March 28, from 9 am to 1 pm, as she celebrates the life and legacy Cesar Chavez.