The legacy of labor organizer Cesar Chavez takes a major leap this weekend, with the release of a Hollywood biopic “Cesar Chavez: The Movie.”  This audio feature begins with a clip from the film starring Michael Pena, America Ferrara as wife Helen Chavez, and Rosario Dawson portraying the other major figure in the California farm worker labor movement Dolores Huerta. 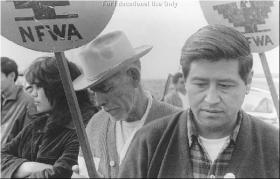 In Denver, this year’s holiday will be observed Saturday, March 29, with a 10:00 a.m. parade from Regis University to Cesar Chavez Park at Tennyson Street and West 41st Avenue.   Cecelia Flores from AARP Colorado’s “El Comite” joined “First Take with Lando & Chavis” to talk about the Chavez weekend activities.

Cesar Chavez Day (the last Monday in March) has been an official holiday of the city and county of Denver since 2002.   On Monday, March 31, parking meters will be free.

For more information on the Saturday parade and celebration, call Roberto Rey at the AARP Colorado state office at 303-318-6763.