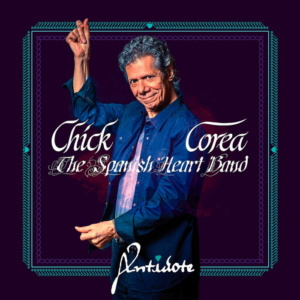 Few if any living names in jazz resonate worldwide as strongly as does Chick Corea. Born in Chelsea, MA, he’s of Spanish and Sicilian heritage. Over the decades he has occasionally recorded songs reflecting his father’s lineage, Spain based on Concierto de Aranjuez and Armando’s Rhumba-Chick’s birth name are the most well-known. Chick also released My Spanish Heart, a highly acclaimed album in 1976. When Corea arrived in New York City in the early 1960s, many of his earliest concerts and recordings were with the legendary Cuban percussionist and band leader, Mongo Santamaría, as well as Willie Bobo and the lesser known Montego Joe. Moreover, he recorded Latin jazz albums with vibraphonists Cal Tajder and Dave Pike then with flutist Herbie Mann’s Latin ensemble so the “Spanish Tinge” has always been a part of Armando Anthony Corea’s playing.  In the late 1960s, Chick replaced Herbie Hancock in the Miles Davis group, from there he formed the group Return to Forever which is acknowledged as being the jump start for jazz fusion in the 1970s. Corea also continued playing in more traditional jazz groups with his Akoustic Trio and the New Trio. Chick has been nominated for a Grammy® over 60 times and has won over 20 times. In 2006 he was bestowed the prestigious National Endowment for the Arts (NEA) Jazz Master award.

Throughout his illustrious career señor Corea has played and recorded an amazing variety of music and has played in just about every conceivable format, always keeping it innovative while never standing still. For his latest recording, Chick has released a concept album with his new group, The Spanish Heart Band, titled Antidote.  This session is flamenco jazz at its best! As always, Chick surrounds himself with outstanding musicians, Carlitos del Puerto-bass, Marcus Gilmore-drums, Steve Davis-trombone, Michael Rodríguez-trumpet, Luisito Quintero-percussion and to ensure maximum authenticity, the Spanish musicians Jorge Pardo-flute/sax, Niño Joselo-guitar and Niño de los Reyes-flamenco bailarín (dancer). Extra special invited guest on vocals is the extraordinary Rubén Blades.  The Spanish Heart Band remains true to Spanish and flamenco traditions however they are not stuck in the past, their playing is modern and imaginative with palmadas (handclaps) and some flamenco dancing. This recording; Antidote lives up to its title as it will brighten up your most cloudy day, after you listen to it, you may find yourself craving some tapas, wine and paella all the while you’ll be shouting olé!