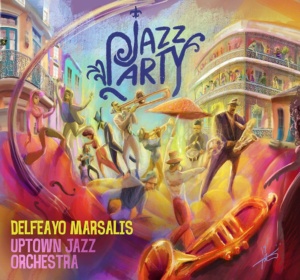 Delfeayo Marsalis is part of the legendary family of new Orleans musicians, he and his father Ellis along with brothers Wynton, Branford and Jason made history when the entire family were inducted into the NEA Jazz Masters Hall of Fame in 2011 as the first and still only group recipients. Besides an excellent trombonist, Marsalis is also a respected educator, composer, arranger and a very talented in-demand record producer. For his most recent recording, Jazz Party! on his own Jass Troubadour Records, Delfeayo chose a playlist that reflect his Uptown Jazz Orchestra performances at the famed Snug Harbor club of New Orleans where they hold court just about every Wednesday evening of the year. Jazz Party is a rousing reflection of the music of The Big Easy featuring traditional jazz, second line, funk, Latin, blues and soul elements thrown into the gumbo pot that is New Orleans-the northernmost port of entry of the Caribbean. Of the 11 songs on the recording, 4 are vocals.

Mardi Gras-Fat Tuesday carnival celebration derives from Shrove Tuesday, the day before Ash Wednesday the commencement of Lent, the traditional time of somber, self-sacrifice leading up to Good Friday and Easter Sunday 40 days later. Mardi Gras, a French Catholic tradition, arrived at New Orleans during the French occupation of Louisiana and it’s a day of joyous partying before observing Lent. Delfeayo Marsalis & the Uptown Jazz Orchestra’s Jazz Party is an ideal choice for KUVO Jazz’s February CD of the Month due to the early Mardi Gras date in 2020, a season that is based on the lunar cycle, so it varies every year. Warning: Listening to the Jazz Party! might create cravings for red beans n’ rice, gumbo, jambalaya, po’ boys, chicory coffee and beignets. Don’t be concerned about those extra calories as the music will get you in the mood to dance them away!!