CJRO—”Overjoyed: The Music of Stevie Wonder” | January 2020 CD of the Month 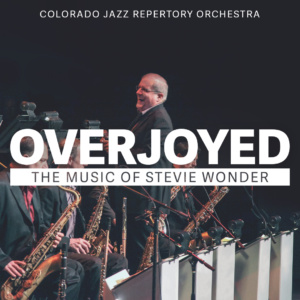 The Colorado Jazz Repertory Orchestra (CJRO) was founded in 2012 by saxophonist and educator Art Bouton. Their mission is to perform the best music with the best musicians. The CJRO has a reputation for bringing exciting world-renowned guest artists to the band stand as well as many of the best Colorado musicians to play anything from swinging big band classics to modern jazz selections to sold-out crowds across Colorado. The band director, Art Bouton is a member of the pit orchestra at the Denver Center for the Performing Arts and is also a professor at the University of Denver, Lamont School of Music.

The Colorado Jazz Repertory Orchestra has amassed a very large and loyal following as perhaps the best big band in Colorado due to the outstanding musicians of the band, most of whom are band leaders themselves Mr. Bouton’s idea for their latest recording, Overjoyed: The Music of Stevie Wonder was not to simply play the songs of Stevie by a big band but rather to have Wonder’s melodies inspire a re-imagination of his compositions while maintaining the original flavor and power of the tunes resulting in a brand new sound for the Stevie Wonder songs included in this album, this is not just a Stevie Wonder cover project.

There are ten selections on Overjoyed, four of which are vocals, two by Heidi Schmidt and two others by Robert Johnson. The orchestra consists of 22 members, after choosing and hiring the band, director Art Bouton likes to say, I get out of their way for best results. Stevie Wonder is rapidly becoming a composer of note in the world of jazz, more and more of his songs are being recorded by more and more jazz artists. Stevie himself has recorded with a wide array of jazz artists as well. When you listen to the entirety of Overjoyed: The Music of Stevie Wonder you will feel like you have reached a higher ground!