Denver restaurants lean on community to make it through pandemic 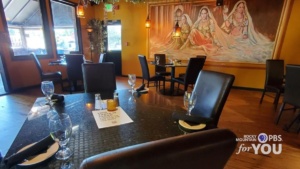 DENVER — In mid-March, when restaurants were ordered to shut down indoor dining, Tony Zarlenga was nervous. He is the owner of Denver’s Cafe Brazil.

“For us—a restaurant that has built its reputation on ambiance, music—this was almost devastating,” Zarlenga said.

Almost seven months later, the doors at Cafe Brazil are still open. Indoor dining has picked back up recently, too. But many restaurants weren’t so lucky. “Even for those that were positioned better financially, they’ve taken a huge hit,” Zarlenga said. “Most of our upscale restaurants suffered 60 to 70 percent loss in revenue during this period. They’ve suffered a loss of staff; they’ve had to redesign themselves to cater to a takeout format.”

The Colorado Sun reports over 19 percent of bars and restaurants in Colorado either temporarily or permanently closed between March and May. That is about 2,500 establishments.

At least one Denver restaurant has been fortunate enough to avoid laying off a single staff member: Little India.

Manager Robert Yoakum said Little India was well-equipped to handle the shift to the pandemic-era of food service because they have been doing take out and delivery for a long time.

“We didn’t have to let anybody go. We just kind of shifted their positions a little bit,” Yoakum explained. “But we’re all family here, so we stuck together through it. It’s not over yet, but it’s starting to get better.”

Yoakum added that Little India could have opened indoor dining earlier this year but they wanted to take it slow to stay safe. They’ve recently expanded seating to the parking lot..

The handful of restaurant operators we spoke with said the community has been their biggest support during the difficult times brought on by the pandemic.

At Cafe Brazil, Zarlenga described the return of indoor dining as a “godsend.” He said some people have been eating there up to four times a week to support the restaurant.

“For a restaurant like us, that is going the extra mile,” Zarlenga said. “We were so happy to have guests that were coming to the restaurant for 30 years. I really treasure that moment now. We’ve had so much help from our clientele that it’s just moving and heartwarming.”

Terry Walsh is the owner of Aurora’s Rolling Smoke BBQ. He said residents have been supporting the restaurant through take-out. But Walsh added that Rolling Smoke BBQ usually makes a lot of money through catering. With a lack of large gatherings and events, they’ve been struggling.

“It’s been a little rough for us through covid. Sales are definitely not what they were,” he said. “Hopefully we’ll be here on the other side of it.”