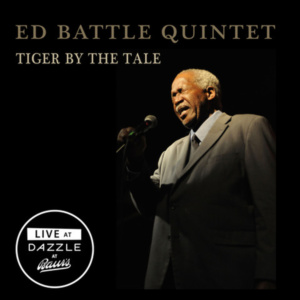 One of Denver’s most admired and beloved musicians and actors is the veteran vocalist Ed Battle. Born into a family of singers in the small southern New Jersey town of Bridgetown in 1934, Ed was raised across the Delaware River in Philadelphia where he began singing as a youngster in the family’s church where many jazz musicians attended services. When at home there was always a gathering around the family piano where everyone would take turns singing. When not singing with the family Edward would have his ears glued to the radio listening to the swingin’ big bands of the ear as well as the popular vocal harmony groups like the Ink Spots and the Mills Brothers. Moreover, Ed became a fan of vocalists Billy Eckstine and Herb Jeffries. Battle’s family didn’t encourage Ed to sing jazz, but several jazz musicians did. In high school, Ed sang choral music and would sneak into the many jazz clubs in Philadelphia while hanging out with future jazz standouts such as trombonist Al Grey, guitarist Tiny Grimes, and bassman Reggie Workman among others. After he graduated from high school Ed moved to Chicago to attend the Roy Knapp School of Percussion. Upon graduating he returned to Philadelphia and commenced dinging jazz in earnest with the jazz vocal group The Skylighters which led to his first recording session, a self-titled LP for the Epic label.

In 1972, Battle chose to move to Denver to live with his cousin, soon thereafter Ed became the lead vocalist for the Horace Henderson Combo which had a huge following, Horace was the brother of the famous big band leader, Fletcher Henderson. After Horace passed away in 1988, Ed became the house vocalist at the legendary El Chapultepec, at that time the ‘Pec was the hangout for visiting out-of-town jazz musicians to jam. When not at the ‘Pec, Ed started to act in stage productions and musicals which led him to tour the US with the Cleo Parker-Robinson Troupe, the Bonfils Theater and others. Battle also made appearances in various films shot in part in Denver. Of note was his role in 1996’s Almost Blue, a film about a jazz saxophonist. Ed was the longtime vocalist for Sam Biven’s Denver Municipal Big Band and often performed at the well-known Dick Gibson House Parties. Throughout the 2000s Ed has continued to sing and act around Denver and has served as a mentor to many young vocalists. In 2012, Ed Battle received a lifetime achievement award at the Annual Five Points Jazz Festival.

To celebrate his 85th birthday year, Michael Fitts of Synergy Music in cooperation with KUVO Jazz has released the Ed Battle Quintet, Tiger By the Tale, a 2-disc set recorded live at Dazzle at Baur’s in 2015. Ed’s majestic baritone voice is heard accompanied by Jeff Jenkins-Hammond B-3, Dave Corbus-guitar, Neil Hemphill-drums, and Peter Sommer-tenor saxophone. The 13-song set recorded in front of an enthusiastic audience on a cold January night spotlights the great ability of Ed to tell a story through song, hence the title Tiger By the Tale.