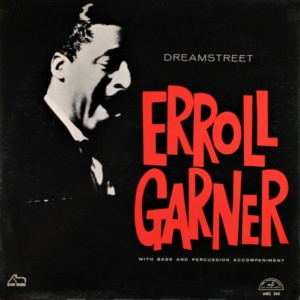 One of jazz’s most accomplished and distinctive pianists, Erroll Garner was born in one of jazz most fertile breeding grounds, Pittsburgh, PA. moreover, he attended George Westinghouse High School where 2 other top shelf pianists, Billy Strayhorn and Ahmad Jamal did.  Erroll’s elder sibling all played piano taking lessons from a piano teacher, however Garner was able to duplicate what his siblings learned from the lessons without any instruction, strictly by ear. By the age of 7 Erroll began playing on the radio and offering concerts at schools around Pittsburgh. By the time he was 20 and not wanting to be in the shadow of his eldest brother Linton who had developed quite a following, Garner moved to New York City around 1944 where he played briefly with Slam Stewart and then Charlie Parker. Mr. Garner was renowned for his marvelous musical memory, a helpful attribute since he didn’t read or write music, after attending a classical music concert by Russian piano great, Emil Gileis at NY’s Carnegie Hall, he returned to his apartment and played nearly the entire concert by recall. Garner’s greatest contribution to the jazz canon is his composition of Misty which he published in 1954, little known and of great interest to KUVO Jazz listeners is that while playing a series of gigs in Denver, Erroll stayed at the home of the Steen family where a young Purnell-now an accomplished piano-bandleader of the Mile High City, was on the stool of the family’s piano next to Erroll while he was working on polishing the final touches of his legendary standard Misty which he played for the first time in Denver. Although a giant of the piano Garner was small in stature and played the piano sitting on several phone books, he was also known for his groaning vocalizations while tickling the ivories. Erroll always had an affinity for Latin jazz and frequently included Latin songs in his concerts and recordings. One of jazz’s best-selling and most popular LPs ever is Erroll Garner’s 1955 Concert by the Sea recorded live at Carmel, California.

Due to his overwhelming success selling recordings and playing around the world, Erroll decided to take control of his music and recordings in the early 1960s and founded his own Octave Music company. The first release from his label was Dreamstreet, a collection of 10 remarkable songs, originals and covers including a mind-blowing 9-minute medley of Rodgers & Hammerstein songs from Oklahoma. The Garner estate has taken this LP along with 11 other albums from Octave Music and have digitally remastered them, with bonus tracks and will be releasing them through the end of 2020. Dreamstreet contains a previously unavailable Graner original, By Chance.  Erroll is accompanied by Eddie Calhoun on bass and Kelly Martin on Drums. We look forward to having all 12 Garner Octave Music sessions released as time goes by. The late pianist Geri Allen said the following about one of her piano heroes; “Erroll Garner personifies the joy of fearless virtuosity and exploration.”