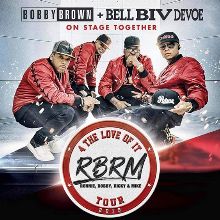 4 The Love Of It Tour Featuring Bobbie Brown. Plus Bell Biv DeVoe, H-Town and Mya

The CD was released in 1990, and its title track became a #1 hit on the R&B chart. The singles that followed were “Do Me!”, “B.B.D. (I Thought It Was Me)?”, “When Will I See You Smile Again”, and “Dope!” (the latter was retitled “She’s Dope!” upon release due to the rising drug abuse among children at the time). Poison sold over three million copies. The remix album W.B.B.D.BootCity:The Remixes, with the Wolf & Epic produced “Word To The Mutha!” as accompanying single, was released the next year and was certified gold. Bell Biv Devoe sold in excess of 4 million albums, prompting performances on the 1990 American Music Awards and other such ceremonies.

Bivins took time off from recording to search for new talent and bring together the East Coast Family, discovering and producing debut albums for the groups for Another Bad Creation and Boyz II Men. Bell Biv DeVoe’s sophomore album, Hootie Mack, was released in 1993 and spawned the singles “Gangsta”, “Above The Rim”, “Something In Your Eyes” and “Show Me the Way”. In 1996, Bell, Bivins, and DeVoe participated in the reunion of New Edition and toured in support of the CD Home Again on the RCA record label. In 2002, Bell Biv DeVoe’s third album, B.B.D., was released. This latest effort saw Bell Biv Devoe exploring a more, hardcore rap style/R&B approach.