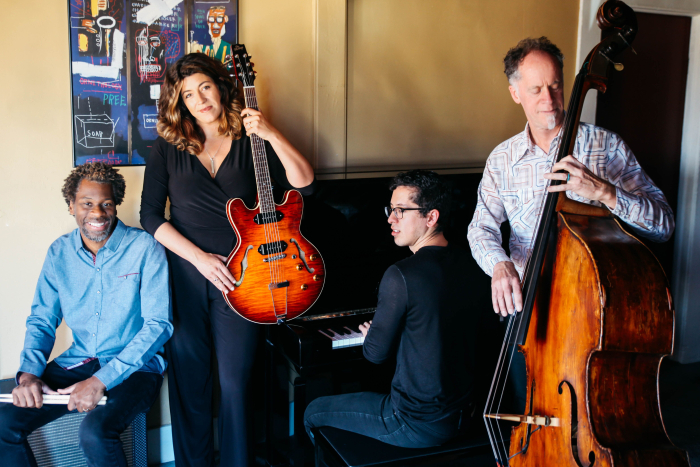 In the wake of the economic crisis of 2008, aspiring musician Steph Johnson made a brave choice: The singer, songwriter, and guitarist chose to abandon her 12-year career in banking to pursue her dreams of making music full-time. Steph has since released 4 albums to critical acclaim, which document her growth as an artist and a woman coming into her own empowerment. Her most recent recording “Music is Art” (2016) was produced by two-time Grammy Award winning producer, Kamau Kenyatta. This recording propelled her career to new heights and celebrates the unique blend of her jazz stylings and soulful R&B roots.

Performing: Steph Johnson on guitar and vocals, Hugo Suarez on piano, Rob Thorsen on bass, and Richard Seller on drums

Studio Club Members: Please contact Arvida arvida@kuvo.org to reserve seats for you and a guest. Not a member of the Studio Club? Find out how to join HERE.

In addition to performing regularly at festivals, concert halls and touring Steph co-founded the Voices Of Our City Choir in 2016. The choir is a community choir created for  people experiencing homelessness in San Diego. The choir has grown to 200 members and has helped 38 people get off the streets and into safe housing and shelter.  A documentary film produced by Susan Polis Schutz, “The Homeless Chorus Speaks” was announced as the Winner of the 2019 Christopher Award. Telling the stories of how the choir members find  hope and community through music, this moving documentary about the choir and Johnson continues to air on PBS nationwide since it release in March of 2018. Steph is currently writing and producing an album by the choir with the San Diego Symphony set to be released in 2020.

Steph Johnson continues to balance her life as the Executive and Artistic Director of the Voices of Our City Choir, while maintaining an active schedule leading her own quartet. With the support of her husband, accomplished upright bassist Rob Thorsen, they hold a residency at the Westgate Hotel in downtown San Diego every Saturday night. To prepare for an upcoming recording project, Steph and Rob will be touring this summer with pianist Hugo Suarez and drummer Richard Sellers. This new album of original compositions as well as a number of jazz standards is set to be released in 2020.

Steph Johnson’s warmth and caring spirit, combined with her soulful musical virtuosity, creates a unique and dynamic sound that has proven her to be an incredibly engaging performer, songwriter and community leader. Click here for videos, music and more.