The Gift of Jazz introduces new online courses and is very pleased to announce
that Peter Stoltzman will be leading their Saturday classes this semester.
Saturdays, April 11, 2020 – June 6, 2020
Offered Online through Zoom’s Web Conferencing Application!
(click here to sign up for the free Zoom video conferencing app)

Saturdays, 11:30am to 12:45pm—Jazz Composition Workshop: Re-imagining Standards through Arrangements and Contrafacts 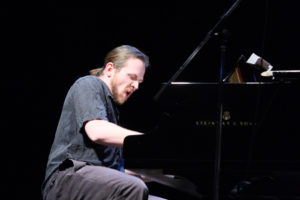 As the son of Grammy-winning clarinet legend, Richard Stoltzman, and renowned violinist and educator, Lucy Chapman, jazz pianist and educator Peter John Stoltzman naturally grew into a career as both a performer and educator. Stoltzman has performed and recorded with jazz luminaries such as Steve Gadd, Eddie Gomez, Allison Miller, Ron Westray, Yosvanny Terry, Tia Fuller, and many more. He has worked at the highest levels of the industry in virtually every style, from recording contemporary classical music with the Boston Modern Orchestra Project, to headlining festivals with the American Music Award-winning funk-rock band, The Bomb Squad, and recording with the innovative drum’n’bass legend, Deantoni Parks, from making Hip Hop tracks with Che Pope at Warner Bros., to performing classical and jazz music at the Hollywood Bowl and Carnegie Hall with his father, and recording original songs with winner of The Voice, Javier Colon. In 2012, Peter was hired as the head of the piano area at CU Denver, where he also founded and helps direct the LYNX Music Industry Program for 14-18 year-olds. He spent 20 consecutive years on the faculty of the Stanford Jazz Workshop, with stints as the Faculty Director and the Co-Director of the Mentor Fellowship Program. He has led Young Audiences workshops and been the Music Director for Austin’s Leadership through the Arts program, and given masterclasses around the world, including Japan, Italy, Canada, and all over the U.S. Stoltzman’s touch and creative imagination on the piano is unmistakable, and his music is distinctly heartfelt. Peter’s current projects include Denver-based indiejazz group, Coexistence Trio, the Peter John Stoltzman New Standards Project, and duo projects with his father, Richard Stoltzman, and Brazilian guitarist, Gabriel Santiago.