Glenn Miller—Moonlight Serenade: The Theme of an Era 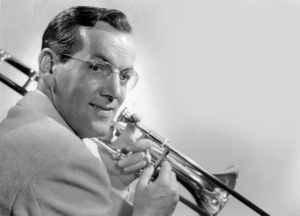 During the big band era of the mid-twentieth century, bands and bandleaders were readily known by their theme songs. Audiences knew at once who they were listening to on network radio broadcasts. As they did with baseball teams and players, the public knew and kept track of every musician in every name band. All of today’s descendants of those avid and loyal followers do not recognize most of the bands or their theme songs. There is one clear exception. Wherever they are or however they hear it, twenty-first century listeners know Moonlight Serenade, the evocative theme song of popular bandleader Glenn Miller, which has come to be the enduring theme song of the entire era. This is the story of the historic musical arrangement and the talented musician who found a unique style and sound that by 1939 captured the imagination of a generation of Americans who were emerging from the economic depression and poised to rescue humanity from fascism.

The song was recorded on April 4, 1939 for on RCA Bluebird. It was a Top Ten hit on the U.S. pop charts in 1939, reaching number three on the Billboard charts, where it stayed for a total of fifteen weeks. It was the fifth most popular hit of 1939 in the Billboard year-end tally, where Miller had five records in the top 20. Learn more about the development of Glenn Miller’s theme, the sound it embodied and the era it represents, here: Moonlight Serenade

Born on March 1, 1904 in Clarinda IA , Alton Glenn Miller, an American big-band trombonist, arranger, composer, and bandleader in the swing era. He was the best-selling recording artist from 1939 to 1942, leading one of the best-known big bands. Died December 15, 1944 (he disappeared over the English Channel at the age of 40.