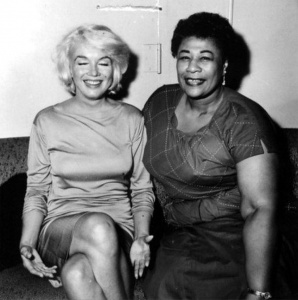 Many are unaware of the friendship and story behind Ella Fitzgerald and Marylin Monroe.

Ella was under the management of Norman Granz in the 1950s. Like many African American Musicians at the time, Ella also faced the same discrimination and inequality due to her race. It was even worse in Jim Crow States. Granz was an advocate and pushed for all musicians to be treated equally at the clubs and hotels they were playing. Many times having to enter through the back of the places they were performing at.

Granz was unsuccessful in many of his efforts for equality amongst musicians. This is where the story and friendship of Marylin Monroe and Ella Fitzgerald comes in!

Mocambo was the club where Frank Sinatra made his LA debut. Ella Fitzgerald was not allowed to pay at Mocambo because of her race. Marylin Monroe found out about this and being a big fan of Ella, she pulled some strings and made a phone call. It has been said that this phone call changed the trajectory of Ella’s career for the better. Although the legend would have most likely been successful regardless, Ella credits Monroe:

“I owe Marilyn Monroe a real debt … she personally called the owner of the Mocambo, and told him she wanted me booked immediately, and if he would do it, she would take a front table every night. She told him – and it was true, due to Marilyn’s superstar status – that the press would go wild.

“The owner said yes, and Marilyn was there, front table, every night. The press went overboard. After that, I never had to play a small jazz club again. She was an unusual woman – a little ahead of her times. And she didn’t know it.”

​While Monroe helped Fitzgerald, Marylin was also influenced by Ella Fitzgerald musically. It is rumored to this day that Monroe’s vocal coach advised her to buy Ella’s records and study them.