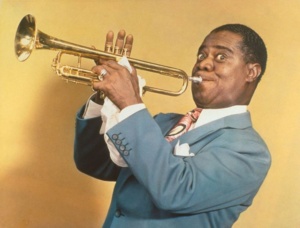 Armstrong was born and raised in New Orleans. Growing up in the 1920s as a trumpet player, Louis Armstrong ended up becoming one of the most significant influences in Jazz, innovating the switch of focus to improvisation with a whole band to improvisation during a solo performance.

His mentor was Joe “King” Oliver. Armstrong tagged along to Chicago with him to play in the Creole Jazz Band.

Not only was Louis Armstrong an influential and innovative trumpet player, he also innovated the world of Jazz Vocals.

Everyone knows the iconic “Wonderful World” (which ironically was not a hit song during his lifetime)  gravely yet rich tone Armstrong has when he sings. Not to mention the scat singing that would change the world of Jazz forever alongside Ella Fitzgerald.

Here is a fun fact about Louis Armstrong you may not have known! Armstrong was not musically trained until he was 11 years old. He was arrested for firing a pistol in the street during a New Year’s Eve celebration. This resulted in an 18-month sentence where Armstrong claimed, “me and music got married.” He spent that time learning how to play Bugle and Cornet from a music teacher.