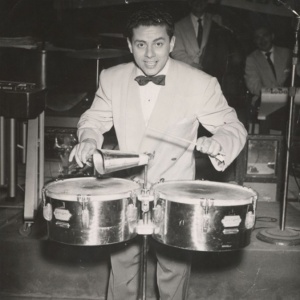 Tito Puente is known as the “King of Latin Jazz.”

Tito grew up in New York City’s Spanish Harlem and became a professional musician at age 13. He learned to play a number of instruments as a child, beginning with the piano and then moving to percussion, saxophone, vibraphone and timbales (paired high-pitched drums).

Tito was growing up during what is known as the “Jazz Age” in the middle of NYC and as many young kids, absorbing all the culture and the music like a sponge. He took music lessons as many musicians start, his start was on piano.  “One of my most vivid memories is playing the Puerto Rican danza, ‘Mis Amores’ for my mother.” Says Puente.

Still studying piano, Tito began lessons with a Mr. Williams, a show drummer teacher. “He knew absolutely nothing about Latin music,” remembered Tito, “but I wasn’t going to him for that. He gave me a good foundation: snare drum technique, how to interpret figures in charts and accompany shows. I would listen to the great dance bands of the day on the radio, Benny Goodman, Gene Krupa. I even won a drum contest playing his solo on ‘Sing, Sing, Sing,’ note for note.”

In addition to listening to big jazz, Tito was influenced by the music coming out of Cuba. His early favorites included Arsenio Rodríguez and La Orquesta Casino De La Playa, which featured singer Miguelito Valdés. Tito expanded his artistic talents; singing in a neighborhood barbershop quartet and studying dance with his younger sister, Anna. 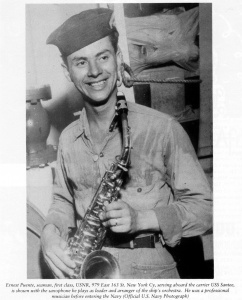 In addition to his history as a musician, he also served in World War II. During his tour of duty, Tito was befriended by a Lieutenant Sweeney, a tenor sax player and pilot who had a previously performed and served as chief arranger for Charlie Spats Big Band. “Sweeney showed me the foundation of writing a good chart, how to lay out voicing and get colors out of brass and reeds. I began writing at this time.” While still enlisted in the Navy, Tito mailed an arrangement based on the tune “El Bag de Chapotin” to the Machito Orchestra. The arrangement was well received. Tito was discharged in 1945—he had seen action in nine battles and received a Presidential Commendation. He began to write arrangements for a number of bandleaders including Pupi Campos and José Curbelo and he was freelancing extensively as well as conducting, contracting, arranging and studying the Schillinger System with Richard Bender. Developed by mathematician and theorist Joseph Schillinger, this system was a popular method among jazz musicians, including Stan Kenton, whose writing influenced Tito greatly. “My goal was to continue to study the Schillinger System but I got sidetracked and became a bandleader.”