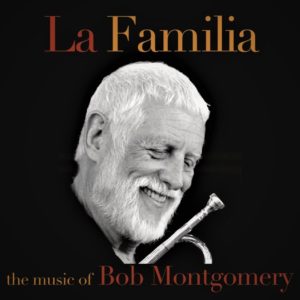 Mentoring is built into the craft of making music. While there are a few self-taught musicians that go on to fame and fortune, the great majority of working musicians studied under a “master.” And often, they go on to mentor others.  Throughout April, KUVO marks Jazz Appreciation Month by playing the music of mentors and their protégés. Exhibit #1 in this effort is one of the most prolific jazz educators in Colorado, trumpeter Bob Montgomery.

“Go see and listen to as many working musicians as you can,” Montgomery tells his young charges. “Learn the language of music, the sounds, the rhythms, the feeling of music, so you can discover your own voice.”

I caught Montgomery at his home at lunchtime. “I’m just getting ready to practice,” said Montgomery. That’s no surprise to those who know how the masters do it. They practice. They devote themselves to the craft. They take nothing for granted. I’m watching and learning.

Montgomery produced “La Familia” in 2018, with 17 of his students (many now professional players), and a few “older” cats.  KUVO Jazz music director Arturo Gómez wrote: “After 60 years of playing music and teaching, (Bob) decided to sit this one out and doesn’t play a note, allowing his colleagues and former students do all the playing of his own compositions.”  It’s a splendid display of mentoring at work, masters and students, older and younger, sharpening each other toward a better musical experience. 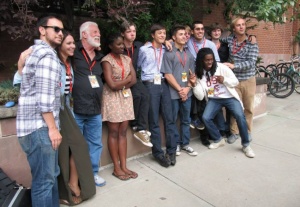 For a quarter century, Montgomery directed the Telluride Jazz Festival All-Stars summer camp, including hundreds of blind auditions, daytime rehearsals and evenings in clubs around town. “These young players were so good, you couldn’t call a tune they didn’t know.” Montgomery says Maynard Ferguson and Larry Coryell hired young players they met in that rich creative environment.

Who mentored Bob? “James Moody (and wife Linda) would come over to the house when he was in town with Dizzy or other bands. James told me, ‘When you play a few notes, wait. Let the audience think about what you played.  Then play some more. They will become interested in your musical story.’” Bob Montgomery’s relationship with NEA Jazz Master Clark Terry has also been documented. Bob played on the European tour of Clark Terry’s Big Bad Band. 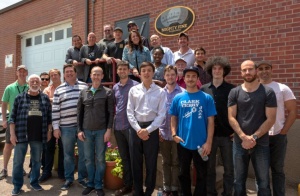 “The 24 musicians who recorded my original music in May. 14 tunes over 2 days of recording. They were all amazing and included musical friends from throughout my career. What a joy to hear the wonderful musicianship they all brought to the studio.” —Bob Montgomery