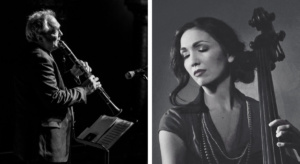 Nocturne Jazz & Supper Club presents Ken Peplowski & The Katie Thiroux Trio on Tuesday, December 10 at 6pm and 8pm. A triple threat talent, Katie Thiroux has garnered considerable attention for her bravura bass playing, singing and compelling compositions. With the release of her debut album, “Introducing Katie Thiroux,” her substantial gifts as a bandleader and recording artist earned her “Debut Record of the Year” from the Huffington Post, All About Jazz, Jazz Journalists Association and “Top 5 Debut Records of the Year” from NPR Jazz Critics Poll. Katie just released her newest recording “Off-Beat” on Capri Records and Nocturne is excited to be a part of her tour supporting this new release. Recent performances with her quartet include sold out concerts at the Blue Note, Birdland, Upstairs Jazz (Montreal) and the San Jose Summer Jazz Fest. In May 2017 Thiroux paid tribute to Ella Fitzgerald at the Grammy Museum at the request of the GRAMMY Foundation. Thiroux has toured and performed with: Larry Fuller and Geri Allen, trumpeters Terrell Stafford and Brian Lynch and drummers Lewis Nash and Jeff Hamilton.

Ken Peplowski: The late Mel Torme´said: “Since the advent of Benny Goodman, there have been too few clarinetists to fill the void that Goodman left, but Ken Peplowski is most certainly one of those few. The man is magic.” Ken Peplowski’s high level of virtuosity is lauded by critics, and not only is Ken an outstanding clarinetist and gifted musician, but also a engaging and charismatic entertainer who has been delighting audiences for over 30 years with his warmth, wit, and musical talent.

Ken Peplowski made his professional debut at ten and played locally in Cleveland for many years. After spending 1978-1980 touring with the Tommy Dorsey ghost orchestra, Peplowski settled in New York, freelanced in a variety of settings and played with Benny Goodman. By 1987, he was a Concord artist and has since recorded frequently for that label, also backing Mel Tormé and Rosemary Clooney, and leading his own band in that time. Ken Peplowski has recorded over 4 dozen CDs as a soloist, and over 400 as a sideman.