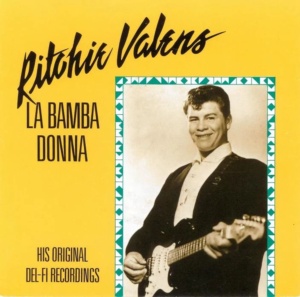 Although Ritchie Valens lived only 17 years, he has been called the father of the Chicano Rock Movement. He was born Ricardo Esteban Valenzuela Reyes on May 13, 1941. Ritchie’s death on February 3, 1959, has become known as “the day the music died”. He died in a plane crash in Iowa along with musicians, Buddy Holly and J.P. “The Big Bopper” Richardson and the airplane pilot, Roger Peterson.

More impactful than his mode of death was his zest for family, for life, and his passion for music. He was born in the San Fernando Valley region of Los Angeles in Pacoima. Although raised in poverty, his Mexican parents instilled the values of family, and Mexicano-Chicano culture into Ritchie and his three siblings. Ritchie listened to and was inspired by Mariachi, Flamenco, Jump Blues, and Rhythm and Blues. He was a self-taught musician learning the trumpet, guitar, and drums. Although he was left-handed, he taught himself the right-handed technique of guitar playing. A Pacoima band named The Silhouettes invited Ritchie to be their guitarist and eventually their lead singer. That was the beginning of his musical career. The students of San Fernando High School dubbed Ritchie “The Little Richard of San Fernando”. The owner of Del-fi Records named Bob Keane heard stories about this phenomenal high school musician and invited Ritchie to record a few demos at his home studio. We will hear a couple of these demos on the La Raza Rocks – Ritchie Valens Tribute Special. Bob Keane signed Ritchie to a record contract on May 27, 1958. Ricardo Esteban Valenzuela Reyes had only turned 17 when he inked that contract. Ritchie recorded a couple dozen songs at Del-fi Records. Bob was aware of the blatant, racist, discriminatory practices towards Mexicano-Chicano musicians in the United States so he convinced Ricardo to change his name to Ritchie Valens so that the racist radio DJs would play his records. Ritchie composed many songs but covered a classic Mexican Son Jorocho tune from Vera Cruz titled La Bamba. That became his signature song.

Ritchie appeared on The American Bandstand Show in 1958 and on Alan Freed’s Christmas Show. He toured Hawaii, New York, and Philadelphia. He appeared in the motion picture titled Go Johnny Go and sang Ooh My Head.

This young man was a shooting star in the music industry, but he was a guiding star for many musicians and music lovers who not only heard youthful exuberance in his music but more importantly enduring wisdom. A US postage stamp was issued to commemorate his life, and a star in Hollywood as well, but the true testament to Ricardo Valenzuela’s life is our appreciation and enjoyment of his music.

Check out La Raza Rocks with host Pocho Joe on Sunday, January 30, from 1 to 2 pm for a Ritchie Valens Tribute Special.

Ritchie’s career was nine months from his time in the Silhouettes until his death. Ritchie’s professional career was eight months from signing a contract with Del-fi Records until “the day the music died.”