Long Play on the Nightside — Full On Langston

Listen to Long Plays during the 11 o’clock hour of The Nightside with Andy O’…the special extensive compositions require a deeper listen.

This Grammy-nominated release is extraordinary, partly because Ask Your Mama is generically unlike any other work ever composed. It is based on a cycle of poems of that title by Langston Hughes, written in 1960 and subtitled 12 Moods for Jazz. 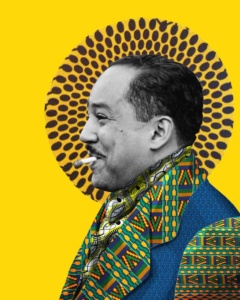 Hughes conceived the work at the Newport Jazz Festival that year, creating it as a reflection on the brave new forms of black culture that were emerging at that time, and he specified general ideas and even specific cues for accompaniment without actually writing or commissioning music. Despite the subtitle, he did not restrict the music to jazz. “Ask Your Mama” as heard here is composer Laura Karpman’s realization of Hughes’ vision, which encompassed jazz in several forms, blues, gospel, Latin jazz dance music, devices from the European tradition, calypso, African drums, and, memorably, “Shave and a Haircut,” which is one of several verbal and musical motifs that knit the work together. Karpman’s structure is clear and distinctive — what you hear here is a single composition, not a jazz album with guest stars — but it’s loose enough to incorporate a variety of talents, including hip-hop group the Roots, jazz vocalist Nnenna Freelon, and others, all doing their own things.

The first thing you hear is Hughes’ own introduction to the work, recorded when he wrote it (although he never heard the whole work performed in any musical realization), and his voice, sometimes sliced up and reconstituted, also runs through the entire work. This is an extremely compelling fusion of contemporary and historical elements. It’s hard to recommend a single place to start, but try “Ode to Dinah” (CD one, track five), which is a virtuoso reflection on the blues and on the music of Dinah Washington. The traditions of concert music and of African-American vernacular styles have never been combined before as they are here, and the work would be ideal for large-scale, collegiate oratorio-like performances incorporating a variety of forces. This performance, however, may be ideal.

Tune in to The Nightside with Andy O’ on Sunday night, January 30, from 8 to midnight.