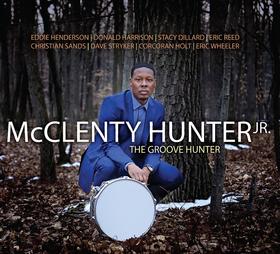 Drummer McClenty Hunter Jr. like so many other musicians amassed his earliest experiences playing in the church, since then he has gone on to make a name for himself as a “first-call” drummer in jazz, both in touring bands and in recording studios. Born in Detroit and raised in the Baltimore suburb of Columbia, MD, Hunter has released his debut as a leader, The Groove Hunter which is an ideal title as that is what McClenty likes to do, hunt down different grooves.  After discovering jazz as a teen, he was awarded a scholarship to attend the prestigious Howard University of Washington DC where he studied under the talented drummer, Grady Tate earning his Bachelor’s degree. From there he relocated to New York City and matriculated at Julliard School of Music where he received his Master’s Degree after being instructed by the gifted drummer Carl Allen. It was Mr. Allen that encouraged McClenty to go back in time and study the best drummers of jazz’s past enabling him to play the many splendid varieties of jazz from the past to the present. While attending Julliard, Hunter began his professional career playing and recording with the pianist Eric Reed. From there he has gone on to perform and record with some of the biggest names of jazz today, Javon Jackson, Kenny Garrett, Lou Donaldson, Curtis Fuller and many others.

McClenty has been a member of the Dave Stryker ensemble for over five years, therefore it’s not surprising that The Groove Hunter is on Dave’s Strikezone Records label.  Four of the nine selections were penned by Hunter. Beginning with the obscure tune by pianist Herbie Nichols, Blue Chopsticks and continuing to Give Thanks, McClenty Hunter Jr. proves all the hype about his playing is true! He surely is a cut above and not just another drummer. Whether he is keeping time, vamping or soloing, Hunter’s soulful church background can be heard and felt in his playing. To ensure his playing is accompanied by high-quality musicians, McClenty recruited some outstanding sidemen. Trumpet work is by Eddie Henderson, Donald Harrison is on alto sax while Stacy Dillard checks in on tenor and soprano saxophones, piano playing is shared by Christian Sands and Eric Reed, Corcoran Holt and Eric Wheeler alternate on bass and McClenty’s bandmate and label owner Dave Stryker chimes in on guitar. Stand out tracks include Wayne Shorter’s The Big Push and the catchy That Girl, a Steve Wonder composition. When you finish repeated listens to The Groove Hunter by McClenty Hunter Jr. you’ll begin to look forward to which new grooves McClenty will hunt down for his follow-up album.

Join the CD of the Month Club to get a specially selected new CD every month. 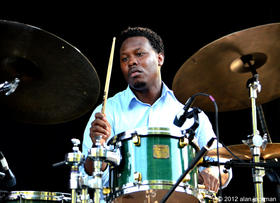