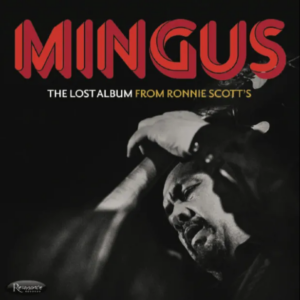 Charles Mingus – The Lost Album from Ronnie Scott’s
Choose the 3 CD Box Set or the 3 LP Vinyl set as your thank you gift when you donate a $240 one-time gift or $20 monthly installments as a Jazz Messenger sustaining member.

The live set, comprising nearly two-and-a-half hours of music, was professionally recorded on eight-track tapes via a mobile recording truck on Aug. 14-15, 1972. However, the performance went unreleased, for Mingus – along with every other top jazz musician on the Columbia roster except for Miles Davis –who was dropped by the label in the spring of 1973. The present release is completely authorized by Jazz Workshop, Inc., which controls Mingus’ music,  released in conjunction with the centennial of Charles Mingus’ birth, April 22, 1922, Nogales, AZ but raised in Los Angeles, CA 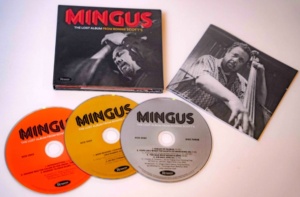 Though his group still featured the formidable saxophonist Bobby Jones (tenor) and Charles McPherson (alto), the sextet was in a state of flux, but the new members delivered on stage. Pianist Jaki Byard was succeeded by the relatively unknown John Foster, who showed off both his keyboard and vocal chops at Scott’s. Longtime drummer Danny Richmond, who had joined the pop band Mark-Almond, was replaced by the ingenious, powerful Detroit musician Roy Brooks, who demonstrated his invention the “breath-a-tone,” which allowed him to control the pitch of his kit while playing, and, on a couple of numbers, his abilities on the musical saw. The trumpet chair was filled by the phenomenal 19-year-old Jon Faddis, a protégé and acolyte of Dizzy Gillespie.

“In Sue Mingus’s memoir, Tonight at Noon, she recalls receiving the extraordinary tapes [the band] had recorded; the reels remained in the Mingus vault, untouched until now. It is our honor, forty-nine years later, to present, with Resonance Records, this historic performance.”

“Music is my life. Without it, I’d be dead. All I need is score paper and a piano.” — Charles Mingus, from an interview in London, 1972

Get KUVO Gear when you Donate!

Support Your Oasis in the City!