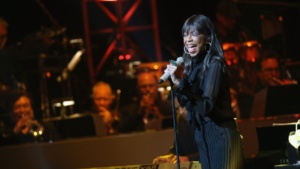 Did you know? Cole made her singing debut at age 6 on a recording of “I’m Good Will, Your Christmas Spirit” with her father, Nat “King” Cole.

Cole recorded her first album in 1975 and quickly found success. That album included one of her biggest hits, “This Will Be,” which earned her her first Grammy award.

Natalie Cole took no prisoners in the studio or on stage. She was blessed with superior vocal range, solid phrasing and a workhorse ability to dramatically build a song into a powerful climax. Just listen to her stratospheric, 11th-hour wailing in the final choruses of 1977’s “I’ve Got Love on My Mind.” It’s like the earth itself opens up after the bridge. Then, take a listen to her quietude and interiority on the gossamer-gentle wedding ballad “Inseparable.” Her vocal mastery was impressive then, and it’s impressive now.

Given that Natalie Cole had neither the improv chops nor the artistic bohemianism of, say, jazz mavericks like Dianne Reeves or Cassandra Wilson, her jazz discography (including records like 1993’s Take a Look, 1996’s Stardust and 2008’s Still Unforgettable) is competent, genteel, tasteful and respectable, but hardly transcendent. Still, her all-markets approach to jazz-pop fusion, not entirely dissimilar from artists like Brenda Russell and Oleta Adams, helped pave a path for future stars in the jazz-pop field like Vanessa Williams, Queen Latifah and others.

Glenn Miller—Moonlight Serenade: The Theme of an Era