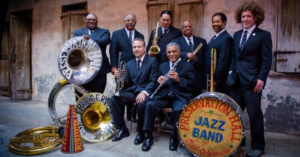 In 2017, the Memphis-born, Flint-raised singer Dee Dee Bridgewater, who appears at the Newman Center on Saturday, received appropriate recognition by the National Endowment for the Arts as a Jazz Master. She is, after all, among the most creative and distinguished singers of modern times.

In 1970, she married her first husband, trumpeter Cecil Bridgewater, and before long they headed to New York. And once in the Big Apple, Dee Dee had her first professional job on the national scene as the vocalist (from 1972 to 1974) with the mighty Thad Jones-Mel Lewis Jazz Orchestra.

That was the first time I heard her sing and it left a lasting impression. In 1974, she recorded her first album as a leader, Afro Blue, and it was followed by tributes to Horace Silver, Billie Holiday, Kurt Weill, Ella Fitzgerald, Duke Ellington, the red-earth African music of Mali, and, most recently, her birthplace, Memphis (Memphis…Yes, I’m Ready).

Along with bringing home Grammy Awards, Bridgewater also pulled in a Tony Award for her role as the Good Witch Glinda in the Broadway musical The Wiz. Obviously, Dee Dee’s talents are anything but narrow and limited.

In fact, the first time I actually talked to the singer was after a concert in Shreveport, Louisiana in which she was on a pop-jazz bill led by vibraphonist Roy Ayers right before she was headed to Paris to star in the musical Lady Day. Her career had been lacking in direction for a spell and her sojourn in Paris changed all of that. Bridgewater performs Saturday, November 9 at the Newman Center at 7:30pm.

In addition to Bridgewater, this week also provides a taste of drummers in the form of Dave Weckl and Kenwood Dennard. Weckl, known for his longtime work with Chick Corea, is part of a trio led by guitarist Oz Noy that is at Dazzle, on Thursday and Friday. The trio includes bassist Hadrien Feraud and has sets both nights at 6:30 and 9pm. Noy has his own brand of New York fusion and his current disc is titled Booga Looga Loo.

Dennard is in town for his collaborative effort with area-based saxophonist Joe Anderies on Saturday, November 9 at Dazzle. That group includes Justin Adams on keyboards, Alex Hefrom on guitar and Bijoux Barbosa on bass and has sets at Dazzle at 6:30 and 9pm. Dennard’s current disc (that includes Stanley Jordan on guitar) is Show No Fear. Over the years, the drummer has worked with Jaco Pastorius, Pat Martino, Denver’s Jazz Master vocalist Dianne Reeves and others.

You can also find a CD release event from the septet Boundless at Dazzle on Wednesday at 7pm and a giant celebration of jazz patron Frank Nichols on Tuesday starting at 6:30pm with a score of musicians on hand. And on Sunday, you can do the Klezmer thing with Hal Aqua and the Lost Tribe at Dazzle at 7pm.