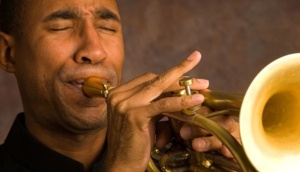 As listeners to KUVO already know, there’s a new release from Denver cornetist/composer Ron Miles. What’s worth noting, of course, is that the album, titled Rainbow Sign, is on Blue Note Records, one of the most famed labels in jazz history.

Several years ago I ran into trumpeter Steven Bernstein who enthusiastically said that everyone in New York was listening to Ron; and now the great respect his music generates from players should keep on spreading among listeners. For example, Blue Note has an on-line video series called the “First Look.” And that series has a welcome-to-the-label interview with Ron conducted by the leader of Blue Note, Don Was. It’s something everyone should check out.

The Blue Note connection was facilitated by guitarist Bill Frisell, who is an alum of East High School as is Miles. Frisell is also part of the amazing quintet on Rainbow Sign. That quintet is made up of Miles, Frisell, pianist Jason Moran, bassist Thomas Morgan and drummer Brian Blade. This group was first featured on Miles’s  2017 disc I Am A Man and on Rainbow the quintet continues to provide listeners with a true pot of musical gold.

Though he was born in Indianapolis in 1963, Miles moved to Denver in 1974 and thus qualifies as a Mile High musical child whose tunes on Rainbow serve as a tribute to his late father. Miles, in clarinetist’s Ben Goldberg’s words, “is one of the greatest melodists” to be found on the scene. Goldberg, for those who don’t know, is another Deverite who has gone on to wide national recognition.

Miles, who teaches at Metro State University in town, has a magical blend of music that mixes complete comfort with the music’s tradition with a solid dose of on-the-edge playing. Miles’ early ventures were on the avant-garde side with musical companion the late Fred Hess and along with that there were his regular dates with more mainstream players such as bassist Paul Warburton and guitarist Dale Bruning (Who, by the way, was a teacher of Frisell’s and who first exposed Bill to jazz). To hear that connection, you can check out Bruning’s 2003 Reunion double CD that has Frisell as a special guest.

As for Miles, who has already produced a body of original and often simply beautiful music with a kick before joining the Blue Note crew – a crew that has also included Denver’s potent, multiple Grammy winning vocalist Dianne Reeves – the cornetist deserves to be heard by the largest possible audience. 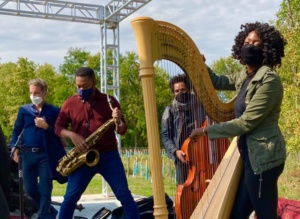 Another item to note this week is a special Jazz For America concert streaming on Thursday at 5 p.m. (Mountain Time) with a host of great players on the order of: Christian McBride, Joe Lovano; Ravi Coltrane; John Scofield; “Tain” Watts; Fred Hersch; John Patitucci; Miguel Zenon; Aaron Goldberg; Sean Jones; Jazzmeia Horn; Brandee Younger; Aaron Goldberg; Melissa Aldana; and Eric Harland. The host of it all is Dee Dee Bridgewater and a special guest is Doug Emhoff. If you are wondering about Mr. Emhoff, he is the husband of Senator and Vice-Presidential nominee Kamala Harris. He also named his two children after jazz masters John Coltrane and Ella Fitzgerald. Go to Jazz for America to connect to the music.