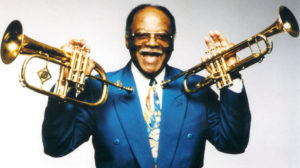 Earlier this week, on December 14, the jazz world marked what would have been the 10oth birthday of trumpeter Clark Terry if he had not passed away in 2015. Through his long career, Terry exhibited both musical talent and the kind of class that was hard to resist whether he stood in front of his own big band or the Tonight Show Orchestra or helping the development of young musicians on their way to fame as was the case with singer Dianne Reeves who he heard performing with her high school band during a convention performance in Chicago.

Terry invited the young Denver singer to sing with him and before too long, she was recording for Blue Note Record and picking up Grammy Awards with great regularity on her way to 2018 recognition as an NEA Jazz Master.  In addition to Reeves, Terry also has ties to another Denverite, trumpeter Bob Montgomery, who played with Terry’s big band and appeared in the Terry documentary, Keep on Keepin’ It. 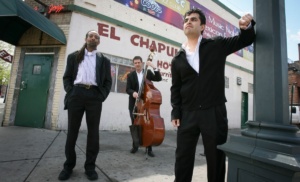 Sticking with area-based musicians for a moment, a number of the talented players who live in these parts have live streams in the coming days at Dazzle and Nocturne. At Dazzle, Freddy Rodriguez (the Jr.) leads the Jazz Connection there on Friday, pianist Annie Booth is there on with her trio doing Part One of the Christmas sounds of Charlie Brown (Part Two is on Wednesday, December 23) and on Sunday it’s one of the strongest newer trumpeters around, Gabriel Mervine.

Over at Nocturne, the twin saxophonists Taylor Clay and Daryl Gott join forces at 7 pm on Saturday, while pianist Tom Amend does Charlie Brown and more on stage there on Tuesday.

The live streaming shows at the clubs swing into play at 7 pm.