If you are looking for one of the area-based jazz organizations that clearly has earned your support, then look on no further than Dazzle on Sunday at 6 pm where alto saxophonist Bobby Watson appears in a benefit presented by the Gift of Jazz with a strong collection of area-based players that covers the waterfront with horn men Brad Goode and Rico Jones and a rhythm section made up of Eric Gunnison, Ken Walker, and Harold Summey. 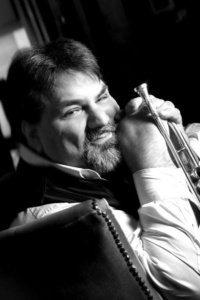 Watson comfortably rests in the top tier of alto men and this visit is a fundraiser for trumpeter Al Hood, who fell on some ice of our recent snow and, according to the club, is currently paralyzed from the neck down and is receiving spinal treatment tied to a GoFundMe page https://www.gofundme.com/f/support-al-hood-in-his-recovery

Hood is among the flock of strong trumpeters who have traveled through or landed here in Denver. He is a teacher, a co-leader of the H2 Big Band, a member of the Phil Collins Big Band and Woody Herman’s Herd, a recording mate of the famed trombonist Curtis Fuller, an authority on the great trumpeter Clifford Brown, a member of the talented Ken Walker Sextet and other groups (for example, Hood was on the schedule to play during February with saxophonist Peter Sommer at Nocturne and with Walker’s Sextet and his H2 Jazztet).

Like Hood, Watson teaches and leads a college big band. He also has Jazz Messenger credentials (1977-1981) and helped create the band Horizon, as well as being a founder of the 29th Street Saxophone Quartet.

Several years ago, Watson came to town with his band for several days and I managed to catch every set they played. I didn’t do that again until the group Still Dreaming played its first gig in Denver and I was there every time for that quartet (with Joshua Redman, Ron Miles, Brian Blade, and Scott Colley) took the stage over several days.

Watson is a soulful and fluent monster on his horn and Al Hood deserves the community’s support. Also, the evening serves as a memorial to Shyrel Smith Hosseini. Shyrel was a great person, a strong supporter of the music, and a mighty educator. If you attended jazz events, you have seen Shyrel.