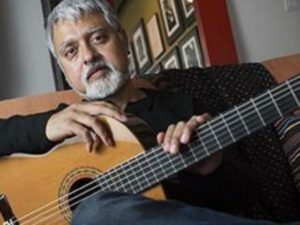 During the mid-1990s, tenor saxophonist Javon Jackson, who grew up in Denver, recorded three of his Blue Note albums with a special guest on guitar – Fareed Haque. Those albums are, in turn, “For One Who Knows,” “A Look Within,” and “Good People” and all of them amply display Haque’s post-bop guitar credentials.

At the same time, the guitarist, who is at Dazzle on Thursday and Friday at 6:30 and 9:30 pm. is also known for his more multicultural fusion side that is on the table with groups such as Garaj Mahal. When he pulls into Dazzle this week, Haque has a trio in hand that includes Paul Wertico on drums and Larry Gray on bass.

Wertico, who, like Haque, was born in Chicago is widely known for the 18 years he spent as part of guitarist Pat Metheny’s Group and that band’s fusion sound. Bassist Gray is a Chicago player who has recorded with pianist Ramsey Lewis and guitarist Larry Coryell.

A little over a decade ago Haque, who ventures into both the jazz and the classical traditions, received the votes to be named the Best World Guitarist by the readers of Guitar Player Magazine. And in 2019, he retired from Northern Illinois University after three decades of teaching to spend more time touring with his own bands and with Croatian guitarist Goran Ivanovic and drummer Billy Cobham. He is an intriguing player, to say the least. 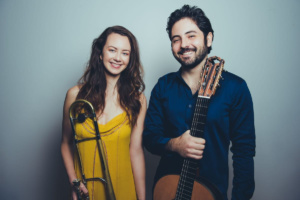 Also at Dazzle during this week that contains Valentine’s Day, you can find trombonist/vocalist Natalie Cressman and guitarist/vocalist Ian Faquini on stage on Sunday, Feb. 13, at 1 pm, 6, and 9 pm. Cressman has performed with a number of bands, though I am personally drawn to Peter Apfelbaum’s Hieroglyphics Ensemble. She is an up-and-comer on the bone.

Other vocalists at Dazzle during Valentine’s week on Feb. 12, are Marguerite Juenemann and Jocelyn Medina. Juenemann is on stage at 6 p.m., and Medina is on stage  at 9 p.m.