This week you have a chance to step out toward the edges of the music when Dazzle at Baur’s offers up the New Origin Trio on Friday and Ragin, Warren, van Hemmen, and McLagan on Wednesday.

Though trumpeter Hugh Ragin is a long time resident of Colorado, many people here don’t realize he is among the most significant trumpet players connected to the post-modern-jazz tradition. There’s a reason he is part of the new edition of the Art Ensemble of Chicago. During his career, Ragin worked with saxophonists David Murray, Roscoe Mitchell and Anthony Braxton and, most recently appeared on Mitchell’s 2017 ECM disc Bells for the South Side.

When Ragin was part of Murray’s big band playing a regular date in New York, the New York Times commented that the band contained a number of the best players in New York – and, I always like to say that one of those players was Ragin who lived in Denver.

The second trumpeter in the group is Kenny (Slavic Soul Band) Warren, who started off in Denver before settling in New York in 2006 and making his name on the improvisational jazz scene. Warren is one of an imposing number of trumpeters from here who are making musical waves well beyond the mountains. Dutch drummer Flin van Hemmen (who moved to New York in 2008) and area-based Kent McLagan round out the quartet that the stage at Dazzle, 1512 Curtis, on Wednesday at 7 p.m. (303-839-5100

The New Origin trio that plays Dazzle on Friday at 7 p.m. is a long-standing European group made up of Christophe Rocher on clarinet, Joe Fonda on bass and Harvey Sorgen on drums. This is another band that can walk you around the edges in fine style. Denver’s Alliance Francaise is presenting the event and it is an organization that keeps stepping in the right musical direction.

Moving more to the mainstream, Dazzle has the Denver Jazz Orchestra on Saturday at 6:30 and 9 p.m., saxophonist Daryl Gott on Sunday at 7 p.m. and pianist Bob Schlesinger on Tuesday at 7 p.m. Schlesinger will release a disc (Different Results) before too long that has Eddie Gomez on bass, Mike Stern on guitar and Billy Drummond on drums. While that group won’t be at Dazzle on Tuesday, you can get a taste on YouTube. Meanwhile, the band with the pianist at Dazzle is nothing to ignore with bassist Kim Stone, guitarist Steve Kovalcheck, and drummer Dean Oldencott. 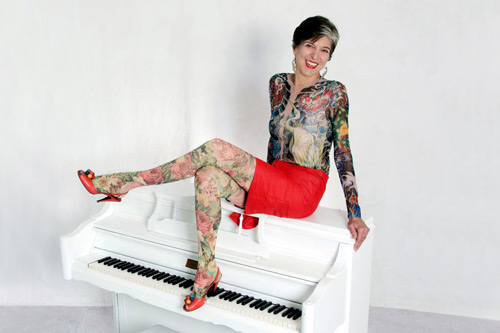 Guitarist Steve Kovalcheck also leads his trio at Nocturne, 1330 27th St., for the late, 11 p.m. set on Saturday (303-295-3333). Remember Nocturne has music Tuesdays through Saturdays, except for July 4th. And over at the Soiled Dove, 7401 E. 1st Ave., singer/pianist Marcia Ball brings her blues-filled, Crescent City-tinged sound to the stage on Friday at 8 p.m. (303-830-9214). On Thursday, the 4th, Ball kicks off the Vail Jazz at Vail Square season in the tent at 6 p.m. (970-479-6146). The Vail Jazz Wednesday club series at the Sonnenalp Hotel also begins this week at 5:30 p.m. with guitarist Yamandu Costa. And on Monday, the 25th-anniversary gala celebration of Vail Jazz takes place in the Larkspur Restaurant in Vail, 458 Vail Valley Drive, with trombonist Wycliffe Gordon and his funk band.