On Stage—Darren Kramer – Trombone and More! 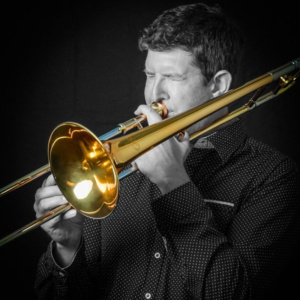 Tune in on Saturday, June 19, at 10 pm for KUVO’s performance series “On Stage, ” featuring trombonist, composer, bandleader, and educator Darren Kramer. From the University of Miami, Kramer has toured with Matchbox 20, Tom Jones, the Tommy Dorsey Orchestra, and Duke Ellington’s Sophisticated Ladies.

Darren Kramer has called the metro Denver area home for a while now, but he’s never settled down musically. His “Darren Kramer Organization” has taken many forms. At KUVO broadcast performances in 2005 and 2007, he led an octet, a nonet, and the D.K.O. Electric Quartet. Among his collaborators: keyboardist Eric Gunnison, reedman Bob Rebholz, bassist Matthew Spencer, trumpeters Rick Jordan and Dawn Kramer, and his oft-drummer Dean Oldencott. Keyboardist Pat Bianchi sat in on the Electric Quartet session.

Tune in for mostly original works, captured as they were broadcast from KUVO’s Phyllis A. Greer Performance Studio and led by Darren Kramer.

That’s this Saturday, at 10pm with host Susan Gatschet.  “On Stage,” a KUVO exclusive!

On Stage: Sessions with Ed Battle