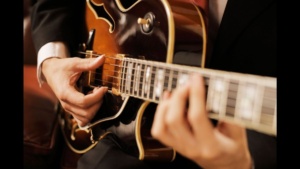 Saturday, August 22, at 10:00 p.m., KUVO’s performance series “On Stage” features guitarist Dale Bruning and some other guitar-centric sounds from the Gypsy Swing Revue and the New West Guitars.

Dale Bruning’s legacy on the Denver jazz scene is secure. He’s been swinging in these parts since the 1960s, and among his guitar students is new Colorado Music Hall of Fame inductee Bill Frisell. He’s performed several times live on KUVO. We’ll be featuring music from his May 2007 session in quintet format with Ali Ryerson, Jeff Jenkins, Mark Simon and Paul Romaine.

In April 2014, KUVO listeners were treated to the New West Guitars. In that session, Perry Smith and John Storie were the duo, accompanied by Tom Gershwin on trumpet.

Catch the magic of these live performances from KUVO’s Phyllis A. Greer Performance Studio!  That’s this Saturday evening at 10p.m. with host Susan Gatschet. “On Stage,” a KUVO exclusive!