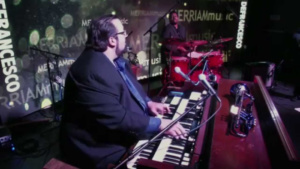 For some keyboardists, one row of keys isn’t enough. They need two! And foot pedals! These are organists, and their rich, full palette of sounds have driven jazz combos since before the days of Jimmy Smith. Here at KUVO’s Phyllis A. Greer Performance Studio, we arranged to have a classic Hammond B-3 hauled in with a Leslie speaker. The results were magical in the hands of the Joey DeFrancesco Trio from 2001, accompanied by Paul Bollenback on guitar and Byron Landham on drums. In 2004, Pat Bianchi (a Denverite at the time) showed up at KUVO with Laura Newman on saxophones, Jacques Lesure on guitar and Matt Amundsen on drums. As a special bonus, we’ve got Bill Cunliffe & The B-3 Trio with Wycliffe Gordon and Lou Donaldson, broadcast in 2000 from the Vail Jazz Festival!

It’s as swinging a pair of sessions as you’ll ever hear, produced as they were broadcast LIVE in KUVO’s Phyllis A. Greer Performance Studio and in Vail. That’s this Saturday, April 11, at 10pm and hosted by Susan Gatschet. “On Stage,” a KUVO exclusive!