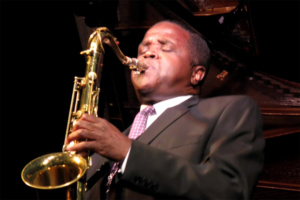 On Sunday, August 11, 2019 at 4 p.m., KUVO’s performance series “On Stage” jumps in the way back machine to bring you a couple of performances with reed man Rickey Woodard.

Known the world over, and known in the U.S. for his work with the Clayton-Hamilton Jazz Orchestra, in 1992 Rickey found himself on the cozy bandstand in Denver’s El Chapultepec. The quartet included Ken Walker on bass and Nat Yarbrough on drums, with Stephan Karlsson on piano. Homer Brown shared some of the tenor sax work that night, with Rickey on alto.  It was a performance for the ages!

A decade later, Rickey visited the KUVO studios as part of the Summit Jazz All-Stars, with Howard Alden on guitar, Eddie Higgins on piano, Colin Gieg on bass and Jackie Williams on drums.

“On Stage,” KUVO’s archive program of classic, local broadcast performances, is hosted by Susan Gatschet every Sunday afternoon at 4 p.m., only on KUVO Jazz!