On Stage: The U.S. Air Force Airmen of Note with Kenny Barron 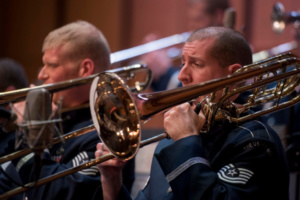 Tune in to KUVO on Sunday, May 26 at 4pm when KUVO’s performance series “On Stage” features the United States Air Force Airmen of Note with famed pianist Kenny Barron, recorded in 2018 in Alexandria, VA.

A product of Philadelphia’s rich jazz scene, Barron began working professionally as a teenager and was soon touring the world with Dizzy Gillespie. Since then, he’s served on the faculty at Rutgers University, and mentored the likes of David Sanchez and Terrence Blanchard.  Named a “Jazz Master” by the National Endowment for the Arts in 2010, Barron has more than 40 recordings as a leader and nine Grammy nominations. The U.S. Air Force Airmen of Note carry on the tradition of Major Glenn Miller’s Army Air Force dance bands from the 1940s. Its international reputation is further burnished by the Jazz Heritage Series, which has hosted a who’s who of superior jazz talent since 1990.