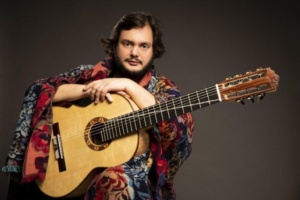 A native Brazilian, Costa made his Vail Jazz debut in July of 2019, drawing inspiration from the music of southern Brazil, choro, samba, bossa nova, and much more. He began his guitar studies with his father Algacir Costa, band leader of “Os Fronteiriços”, when he was 7 years old.  Until the age of 15, Yamandu´s only music school was the folk music from the south of Brazil, Argentina and Uruguay. When he was 17, he played for the first time in São Paulo at “Circuito Cultural Banco do Brasil” (BB Cultural Tour), and from then on he was recognized as one of the most gifted guitar players of Brazil. The music documentary by Finnish film maker Mika Kaurismaki, called “Brasileirinho” on “choro music” also featured Costa, which gave him additional international attention.

Hear the intricate, melodic and magical playing of the Yamandu Costa Trio from Vail Jazz at Vail Square on KUVO’s archive show “On Stage” on Saturday, October 31 at 10 pm with host Susan Gatschet…only on KUVO Jazz!