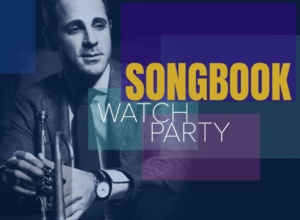 Dominick Farinacci shares his impeccable talent, taste, and musical friends with you at the SONGBOOK WATCH PARTY, a live online show. SONGBOOK WATCH PARTY simulcasts musical performances and interviews from a diverse group of musicians, know-it-alls, and uniquely exceptional performers. Each episode of SONGBOOK WATCH PARTY invites guest artists or groups from around the world – from such realms as jazz, R&B, and gospel – to collaborate, chat, and debut exclusive performances! It’s the only online interactive experience that brings superb musical artists and audiences together in an intimate setting for conversation, fun, and quality music.

Subscribe here to Watch & Party! Reserve your spot! You will receive an email with access information 2 days prior to each show.

Dominick has been a leading advocate in music education development, most recently featured at the Community College Association of America in D.C. He served as Music Consultant to the Amy Winehouse Foundation, and is Artist in Residence at the Gill and Tommy LiPuma Center for Creative Arts at Cuyahoga Community College in Cleveland, Ohio. His educational reach recently expanded to the GCC, in schools such as Weill Cornell Medical College, Qatar Music Academy, the American School of Doha among others.

His most recent recording “Short Stories” is produced by four-time Grammy Award winning producer Tommy LiPuma. This was Tommy & Dominick’s first collaboration, and was recorded in their hometown of Cleveland at the Gill and Tommy LiPuma Center for Creative Arts. Dominick is signed to Mack Avenue Records.