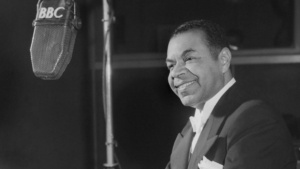 “After You’ve Gone” was written in 1917 by Turner Layton, with lyrics by Henry Creamer, in order to bring some life to the failing road show “So Long, Letty.” The road show failed, but the song hooked audiences, and took off on a life of its own. Creamer and Layton apparently cut a trial record for Columbia in April 1918 which was rejected, but seems to have been the prototype for the recording by Albert Campbell and Henry Burr, which was released just eleven days later. “After You’ve Gone” is one of the three most frequently recorded pre-1920s jazz songs. While several artists recorded copies within a year, Marion Harris’ recording was the most popular, having gone to number one for three weeks in 1919. The song appeared on the charts on at least ten different occasions between 1918 and 1937 and was the theme song for the British television series of the same name, which starred Nicholas Lyndhurst and Celia Imrie. Other early recordings include the 1927 recordings by Sophie Tucker (”The Last of the Red Hot Mamas”) and Bessie Smith. Between 1918 and 1937 it reached the top 20 on the charts on nine separate occasions.

Turner Layton (2 July 1894-6 Feb 1978) composer, vocalist, pianist, vaudevillian and music publisher, was born in Washington, D.C., where he received musical training from his father,“a bass singer, music educator and hymn composer”. He attended Howard University Dental School, then moved to New York, where he met Henry Creamer, with whom he wrote many songs and formed a vaudeville duo which traveled extensively in the United States and Europe. “After You’ve Gone” is their best known song, while “Way Down Yonder in New Orleans” is their next-best-known. In 1922 Layton formed a cabaret act with Clarence “Tandy” Johnstone performing in Harlem and at private parties for patrons including the Astor and Vanderbilt families. The pair followed their clients from Newport in the summer to Palm Beach in the winter. They met Lord and Lady Mountbatton in Florida and were persuaded to move to England in 1924, where Edward, Prince of Wales, was one of their fans. The pair sold over ten million records between 1924 and 1935.While Johnstone left England in 1935 after a divorce scandal and the team broke up, Layton stayed in England until his death in 1978.

Henry Creamer (21 June 1879-14 Oct 1930), lyricist, singer, dancer and producer, performed as a singer and dancer in vaudeville with Turner Layton in America and Europe from 1918 until 1924, using material which they had written. They also wrote several Broadway musicals, the most successful of which was “Strut Miss Lizzie” in 1922. After Layton relocated to England in 1924 Creamer teamed up with pianist James P. Johnson in 1926 to write “Alabama Stomp.” In 1930 their song “If I Could Be With You” became a hit, first for Ruth Etting and later for Louis Armstrong. The Kansas City Six had a hit with it in 1938.