Stories of Standards—All the Things You Are

Jerome Kern and Oscar Hammerstein II wrote “All the Things You Are” in 1939 for the musical “Very Warm for May”. It later appeared in the 1944 film “Broadway Rhythm”. While “Very Warm for May” was warmly received in its first out-of-town performances. Unfortunately, Max Gordon, the producer, missed these and when he did see the show, hated the gangster sub-plot which he removed, leaving only a summer-stock story, which New Yorkers didn’t particularly care for, due to the similarities to 1938’s “Babes In Arms”. In 1984 recordings from the 1939 production were found and made into an LP (long-playing) album, (the oldest Original Cast Recording) which was nominated in 1985 for a Grammy (Best Show Album). The film “Broadway Rhythms” was loosely based on “Very Warm for May” with “All the Things You Are” as the only retained song and a third rewrite of the plot. Steven Sondheim was nine years old when he saw the original production and later said that this experience led to his interest in musical theater. Art Tatum’s 1940 recording influenced many others, notably Charlie Parker who in 1947 used the song as the base for his “Bird of Paradise”. 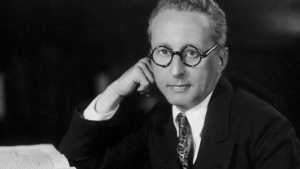 Jerome Kern (1/27/1885-11/11/1945) wrote more than 700 songs, dozens of Broadway musicals and Hollywood films. His family moved from Manhattan to Newark, New Jersey, in 1897, where he attended Newark High School and wrote songs for that school’s first musical. He dropped out of high school to study music, first at the New York College of Music, then in Heidelberg, Germany. He spent some time in London before returning to the US, where he wrote songs for silent films (including “Gloria’s Romance”, one of Billie Burke’s first serial films), and became one of the founders of the ASCAP. In 1915 he was supposed to sail to England with Charles Frohman, the theatre manager and producer, but stayed up late the night before playing piano at a poker party, overslept and missed the boat, the Lusitania. Frohman was on it when it sank. Kern’s collaboration with Oscar Hammerstein II on the 1927 musical drama “Show Boat” marked a significant change in style from light comedy. In 1935 Kern went to Hollywood, where with Dorothy Fields he wrote “A Fine Romance” and “The Way You Look Tonight”. “Very Warm for May” was his last show. In 1945 he suffered a cerebral hemorrhage while walking; he died shortly thereafter, with Oscar Hammerstein II at his bedside. The Songwriters Hall of Fame said of him “He was in many ways a link between the European operetta tradition and the Broadway musical style”. 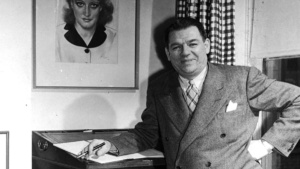 Oscar Hammerstein II (7/12/1895-8/23/1960) won eight Tony Awards and two Academy Awards for Best Original Song and co-wrote 850 songs with numerous others, of whom Richard Rogers and Jerome Kern are two of the best known. Hammerstein’s wife, on hearing someone say that Jerome Kern had written “Ol’ Man River”, retorted ‘Indeed not! Jerome Kern wrote “dum, dumdum-dum”. My husband wrote “Ol’ Man River”.’ After quitting law school to focus on the theatre, Hammerstein’s first collaborations were with Herbert Stothart, Otto Harbach and Frank Mandel. He worked with Harbach for the next twenty years. The first collaboration between Hammerstein and Richard Rodgers was “Oklahoma”, the musical adaptation of the play “Green Grow the Lilacs”. Hammerstein was a member of the Dramatists’ Guild of America and was elected its eleventh president in 1956. He died of stomach cancer in 1960, nine months after the premiere of “Sound of Music”; his last song was “Edelweiss”, frequently mistaken for an Austrian folk song, actually written specifically for the film. A member of the American Theater Hall of Fame, Hammerstein’s influence on American theater is incalculable; he profoundly changed the relationship between music and story line and opened the musical genre to embrace serious issues.