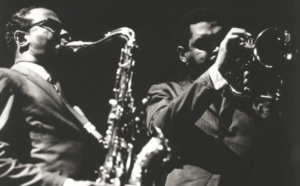 Benny Golson’s “Along Came Betty” first appeared as an instrumental work on Art Blakey’s “Jazz Profile” in 1954. The piece was named for and inspired by a woman named Betty who was dating Golson at the time. Jon Hendricks performed a vocal version in the mid-1950s. By 2000 the song had been used in more than 42 jazz albums.

Benny Golson (25 January 1929-present) played from 1953 to 1959 first with Tadd Dameron’s band, then with a number of leading bands, including those of Lionel Hampton, Dizzy Gillespie and Art Blakey and the Jazz Messengers, serving primarily as a composer before starting his solo career as a performer. He and Art Farmer co-founded The Jazztet in 1959. From the 1960s through the 1970s he focused primarily on composing music for television series before revising The Jazztet in 1982 and returning to performance. In 1995 he was awarded the NEA Jazz Masters Award of the National Endowment for the Arts. Among other awards, he’s received are induction into the International Academy of Jazz Hall of Fame in 2009 and the Mellon Living Legend Legacy Award in 2007. The Howard University Jazz Studies program created the “Benny Golson Jazz Master Award” in his honor in 1996.