Tune in weekday mornings to hear our favorite versions of “Birdland.” Rodney Franks presents Stories of Standards Monday through Friday at 7:50 and 8:50 am beginning Monday, September 20.

“Birdland”, written by Joe Zawinul, was first recorded in 1976 by Weather Report for the album “Heavy Weather,” which was released the following year. A tribute to the nightclub named for Charlie “Bird” Parker, Manhattan Transfer’s 1979 version received a Grammy, while Quincy Jones’ version on the 1989 album “Back on the Block” won two Grammys. 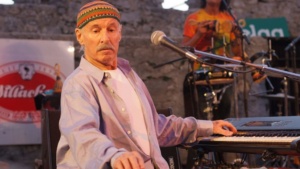 Josef Erich Zawinul (Jul 7, 1932 – Sep 11, 2007) was born in Vienna and first played accordion before enrolling in the Vienna Conservatory at the age of seven, studying classical piano, clarinet, and violin. He first heard jazz while evacuated to the Czech Sudetenland. He returned to Vienna after the war and began performing at clubs on American military bases, where he had access to a Hammond organ. In 1958 he applied for a scholarship to the Berklee School of Music. Having been accepted one of Zawinul’s first stops was at the Birdland club, where he met the woman he married. Within a few weeks after starting at Berklee he was sent as a substitute pianist at a local club, where the drummer Jake Hanna introduced him to trumpeter Maynard Ferguson. He applied to Ferguson’s band the next night, landing his first job with a major American jazz band, before being hired by Dinah Washington. They often traveled with Ray Charles, introducing Zawinul to the Wurlitzer electric piano. After a little over a year and a half Zawinul toured briefly with Sweets Edison and Joe Williams before joining the Cannonball Adderley Quintet, where he stayed for nearly ten years. During that time he wrote “Mercy, Mercy, Mercy” and became Adderley’s principal composer. In the early 1990s Zawinul composed “Stories of the Danube” (commissioned by Brucknerhaus for the opening of the 1993 Bruckner Festival in Linz, Austria) which was later recorded by Phillips Classic and released on CD in 1996. In 2004 he opened his nightclub, “Joe Zawinul’s Birdland”, in his hometown of Vienna. He had been voted Best Electric Keyboardist 28 times by readers of DownBeat magazine. He also won the first International Jazz Award as well as numerous other honors and was the official Austrian Goodwill Ambassador to 17 African nations.